Hulk is the superpowered alter-ego of Bruce Banner. He was created after Bruce was involved in an accident involving gamma radiation and is now one of the, if not the single most, strongest people on the planet. 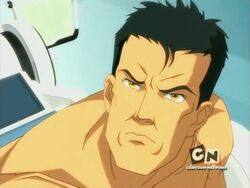 While on the run from Henry Peter Gyrich, Bruce went to the Fantastic Four seeking help. Bruce transformed and Hulk fought Thing. Eventually Gyrich found them and captured Hulk and the team. Eventually Thing caused Bruce to transform and they stopped Gyrich's men. However, Hulk once again fought Thing.

Hulk was voiced by Mark Gibbon.

Retrieved from "https://marvelanimated.fandom.com/wiki/Hulk_(Fantastic_Four:_World%27s_Greatest_Heroes)?oldid=46759"
Community content is available under CC-BY-SA unless otherwise noted.