For other uses of Hulk, see Hulk (Disambiguation).

Hulk is the result of gamma radiation exposure to Bruce Banner. He is an extremely powerful superhero, possibly the strongest on Earth. While he has often been considered a criminal and hunted by the law, he has been a member of both the Avengers and Defenders.

Scientist Bruce Banner’s life would change forever the day he tested his highly dangerous Gamma Reactor for Stark Enterprises. When he noticed a young teen named Rick Jones on the testing range, he ran onto the field in order to remove the boy. Initially thinking the reactor countdown had been delayed, he saved Rick but was too late to save himself and Banner’s body was bombarded with an immense amount of gamma rays. 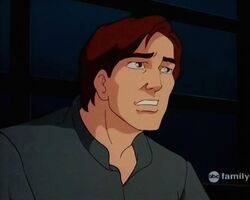 The gamma radiation altered Bruce’s DNA, causing him to become The Hulk, an unstoppable brute with no apparent limit to his strength whenever he became angry or stressed. The creature’s mind exists separate from Banner’s, with Bruce having no control over it and remembering nothing of his time during the metamorphosis.

Realizing that the Hulk is a threat to everyone around him, Banner began desperately working on a cure for his condition, whilst General Thaddeus Ross believed Banner to be a threat, causing Banner to run and act as a fugitive whilst he worked on his cure.

The man who originally sabotaged Banner’s gamma reactor experiment, Samuel Sterns, ironically also became a victim of the radiation itself, whilst on the clean up crew; he fell into a puddle of gamma waste. This gave him increased intelligence and a thirst for power. Believing that Hulk was his creation, Sterns, now calling himself Leader, kidnapped Banner, and planned to steal Hulk’s strength for himself, giving Banner yet another reason to look over his shoulder. 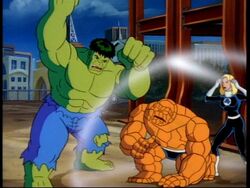 After Reed Richards of the Fantastic Four believed their own transformation was somehow connected to gamma radiation, he asked Dr. Banner to help him research the cause, in hopes of curing Ben of his Thing form. Doctor Doom kidnapped Bruce Banner and tricked Hulk into thinking that Fantastic Four had stolen Rick Jones’ friendship. They battled, but Hulk soon realized that he was being duped, and angrily attacked Doom. Bruce and Rick then left New York City.

When Banner’s nemesis, Leader, attempted to steal Mandarin’s rings in an attempt to travel back in time to gain the Hulk’s strength for himself, Iron Man and Hulk intervened and battled in several different periods of historical importance, whilst Iron Man searched for Julia Carpenter, who was trapped in the past. 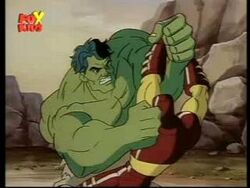 After several failed attempts to cure himself, Banner’s girlfriend, Betty Ross and comrade Doc Samson created a nutrient bath, hoping to separate Banner and Hulk completely. After the test was interrupted by Major Glenn Talbot, the operation left both Hulk and Banner as vegetables. Eventually waking up, Hulk, now a mindless beast, began destroying everything in site, whilst Banner was bombarded by guilt. After attempting to finally defeat Hulk, Banner got him angrier than ever before, and they both collapsed. Eventually Leader kidnapped Hulk and attempted yet again to transfer his power into his body but an incident occurred and Hulk absorbed Leader's intelligence and powers, his head grew big. When Hulk awoke he was possessed by Leader.

Leader possessed Hulk went on a rampage at Gamma Base where Banner was and wanted to capture him. But eventually the transfer went wrong and Hulk was back in his body whilst Leader was normal again. Leader was defeated by Hulk and She-Hulk. Tests showed that Hulk and Banner simply couldn’t survive without each other. Samson and Betty attempted to reverse the Nutrient Bath, but an intervention from the insane General Ross caused Rick to fall into the Bath, leaving him as a version of Hulk. The stress caused another startling transformation in Banner; he turned into a Grey Hulk, with a personality completely different to both Banner himself and the more savage green Hulk. 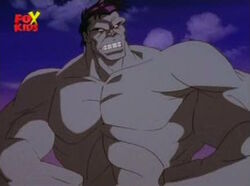 The insane Ross attempted to defeat the new Hulk, but their battle left Ross in a coma. Leader then promised Grey Hulk that he would remove Banner permanently, if Hulk could capture Rick Jones. After capturing the confused teenager, Leader tricked Hulk and tried to steal his powers. The experiment was a failure and Rick-Hulk strength was transferred into Grey Hulk. This event left Banner with three different personalities. Banner himself, the savage Green Hulk, and the arrogant Grey Hulk.

Bruce was possessed by a Dark Entity who sought the world's most powerful being. Bruce then transformed into the Dark Hulk. She-Hulk and Doctor Strange had to go into Bruce's mind to stop them where they were assisted by the mental personalities of both the Green and Grey Hulks.

After hanging out with his cousin She-Hulk for a while, Banner reconciled his differences with General Ross after Thaddeus and Betty became possessed by a parasitic creature.

At some point he joined the Defenders and their adventures were heard about by Peter Parker. He was apparently the only member of the team willing to get dirty, such as going into sewers.

At some other point, Hulk joined the superhero team called the Avengers. However, he left and a portrait of him was put up in their conference center. 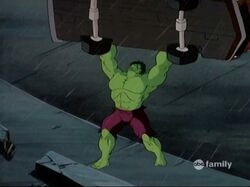 Thanks to the gamma radiation, Hulk is incredibly strong and extremely durable. There is no known limit to his strength. He can lift average sized automobiles with relative ease. He can withstand a tremendous amount of damage and still return to battle. He is able to overpower extremely strong people like Iron Man, Thor, and Thing, possibly being the strongest on the planet.

He also has a powerful Healing Factor, and is able to recover from nearly any wound. Combined with his normal strength, he is seemingly unstoppable.

Hulk is very savage and aggressive monster that easily loses his temper. When he is provoked, he can become very dangerous within the seconds. However, despite his feral nature, he is rather noble creature since he would never intentionally hurt innocent lives. He always recognizes Rick and Betty as his friends. He loves them both very much and is willing to protect them at all costs. However, he strongly hates his alter ego, Bruce Banner, and acts angrily whenever he hears his name.

After Hulk was separated from Bruce, he became a supposedly mindless monster without any memories of Bruce. He was filled with extreme anger and started wreaking havoc in local towns. He even didn't recognize Rick Jones and tried to attack him. However, he retained his memory of Betty and even checked if she was okay after getting hurt by explosion. He was visibly very sad when he claimed that Betty lied to him about not hurting him.

Both the X-Men and Hulkbusters kept copies of Hulk for the purpose of training. When first recruiting the Hulkbusters, Ross had soldiers fight a group of Hulk robots. The X-Men had their Hulk simulation in the Danger Room, presumably for the off-chance that the team would have to fight him. When Juggernaut infiltrated the Xavier Mansion, Professor X used the Hulk simulation to distract him. Juggernaut easily defeated it, either proving just how powerful Juggernaut is or how inadequate the simulation really was.

It was a gamma bomb, not generator, explosion that created Hulk. This was during the Cold War and presumably it was made into a generator to update his origin to modern times.

Bruce initially transformed into Grey Hulk, and only at night. It was a coloring issue that forced Marvel to make him green and with it his more primitive personality.

Rick revealed Bruce's alternate identity after the scientist was thought dead. He told Major Talbot who told his superiors.

He is a founding member of the Avengers along with Ant-Man, Wasp, Thor, and Iron Man.

He is a founding member of the Defenders along with Namor and Doctor Strange.

Wolverine was introduced as a hero tasked with taking down Hulk. Their fight was interrupted by Wendigo. The two have since fought many more times. See Hulk vs Wolverine.

Beyonder brought Hulk into the Secret Wars. The other heroes merged Bruce's personality into Hulk's body. This characterization was given to Lizard/Curt Connors for the story's adaptation on Spider-Man.

Doc Samson separated Bruce and Hulk. Bruce joined the Hulkbusters and married Betty. However, they were reunited and Hulk became grey once again. It was then that Grey Hulk became Joe Fixit, a mob enforcer in Las Vegas. At one point, Wolverine found him and used an eye patch to become an ally named Patch.

The personalities of Bruce, Grey Hulk, and Green Hulk once merged into a personality dubbed Professor Hulk.

He travelled to the future where he fought an evil version of himself called Maestro.

The Bruce, Hulk, and Grey Hulk personalities entered their collective mind to fight a submerged personality that became Devil Hulk. This was the basis for Dark Hulk.