Howling Commandos are from the Yost Universe series The Avengers: Earth's Mightiest Heroes.

The Howling Commandos was a now defunct team of Allied soldiers active during World War II. 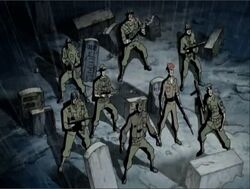 The history of the Howling Commandos are unknown.

Their symbol is of a wolf in soldier gear firing a gun.

Captain America led the Commandos in storming a fortress where the Red Skull and HYDRA were fortified.

The Commandos snuck onto the beaches and towards the fortress. They were spotted and began a battle. Jack Fury was injured so the Commandos stayed outside while Captain America and Bucky snuck in.

However, Red Skull tried to flee in an aircraft and Captain America and Bucky boarded it. Red Skull ejected and the two heroes were thought killed.

Over the years the other members died as well, except for the mutant James Howlett. James lost his memory, took on the name Logan and codename Wolverine, and joined the X-Men.

Eventually, Captain America was found to be alive in a state of cryogenic suspension. He was revived and joined the Avengers.

When Captain America went to Hel, he encountered the souls of the Commandos, or at least figures posing as them. They tormented him but Captain America overcame their taunts. He then made a deal with Hela to resurrect Bucky so he survived the explosion.

Second version of the team after the version seen in the X-Men episode "Old Soldiers". That episode also featured the Commandos helping Wolverine and Captain America sneak into a Red Skull fortress.

It was Nick Fury who lead the team.

Wolverine has never been a part of the team, though he has fought with them and Captain America during World War II.

Clay Quartermain was a member of one version.