The Howling Commandos were an elite group of soldiers that fought Nazis during World War II.

Though he was not part of the team, they were good friends with Captain America and worked with him several times.

In 1944 the team traveled to France, just outside of Paris to the Chateau du Mort. During the early morning hours, the team attacked the chateau. Their initial attack had the benefit of helping save Captain America and Logan. The chateau started on fire.

They saw Captain America and Logan fall off an airplane and followed them. They witnessed the two escape a hay cart before it fell over a cliff. 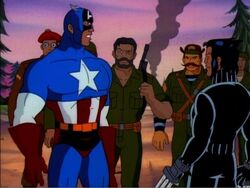 The team ran up to them and Fury called out to the two. He asked if Cap and the "Canuck were fine. As they got near they slowed down and stopped.

Cap told the group that they were fine. He and Fury shook hands. Cap thanked them for attacking the chateau just in time.

Logan spoke up saying that they had failed in their mission to get Andre Cocteau and Red Skull. Cap reminded him that the two just shut down the Nazi's robot project and destroyed one of their major labs.

Cap put his hand on Logan's shoulder and told him that they needed to take their victories as they came in the war. Logan stated that his war would not end until he found Cocteau.

The team and the two others eventually returned to a friendly area to go their separate ways.

Fury and Dugan eventually went on to join S.H.I.E.L.D. It is unknown what happened to the other members.

Only one character, not even the team, was named and he was only given a last name.

Retrieved from "https://marvelanimated.fandom.com/wiki/Howling_Commandos?oldid=38716"
Community content is available under CC-BY-SA unless otherwise noted.