There have been two attempts to produce a Howard the Duck animated series.

A preview for the series appeared during the 1980s in Comic Features #33 but the series was never produced. 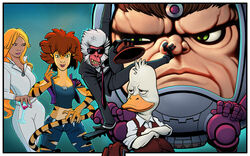 The a second attempt was announced on February 11th, 2019 at the Television Critics Association press tour. It would have released along with M.O.D.O.K., Hit Monkey, and Tigra & Dazzler each leading up to the crossover series The Offenders. This will be similar to Marvel Studios's Netflix series.

The series was going to be written by Kevin Smith and Dave Willis. Smith, Willis, and Jeph Loeb were going to be executive producers.

The series would have follow Howard the Duck as he hoped to return home with the help of his friend Beverly before the evil Dr. Bong could turn him into a meal.[1]

On January 24th, 2020 it was announced that Hulu would no longer be moving forward with neither this series nor Tigra & Dazzler.[2] This also brought an end to production of The Offenders.