The High Evolutionary is a master geneticist and ruler of Counter-Earth.

At some point, High Evolutionary traveled to the Savage Land where he battled Garokk. He trapped his opponent's essence in the ground and left.

He later ruled Wundagore Mountain and created animal-human hybrids called the New Men. At some point, two mutant children were left to be raised there. They were raised by Lady Bova and became the superheroes Quicksilver and Scarlet Witch.

Years later, they returned seeking information about their parents. High Evolutionary and Bova gave them information that led them to Magneto, who they then learned was their father. 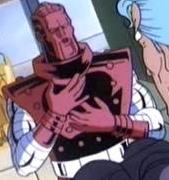 When Magneto was seemingly defeated, the New Men captured all three. The X-Man Wolverine attacked but was also captured. High Evolutionary used his genetic knowledge to turn the X-Man into a wolf-like creature. Charles Xavier and Beast arrived forcing High Evolutionary and his New Men to flee. They entered a large ship and headed out into space.

Somehow, High Evolutionary found his way to Counter-Earth. He and the New Men took over the planet, forcing the humans there to become second-class citizens. He made more Beastials and the Knights of Hundagore made of Sir Ram, Lord Tiger, Lady Ursula, and Lady Vermin to enforce his rule.

He had a child who married and had a daughter. However, he experimented on his granddaughter. His parents took their child and fled.

Some time later, another ship from Earth came carrying John Jameson, Venom, and Carnage. Jameson joined the Human Resistance while Venom and Carnage tried to take over the planet for the Synobtic.

Soon afterwards, another shuttle carrying Spider-Man arrived. Spider-Man then became a figure for the humans to rally behind against the Beastials.

Eventually he found that his granddaughter was a lead figure in the Resistance.

When his patience for Spider-Man and the Resistance grew thin, he tried to exterminate all the humans on the planet.

High Evolutionary was voiced by Robert Bockstael on X-Men and Richard Newman on Spider-Man Unlimited.

His real name is Herbert Wyndham.

He was inspired by Mister Sinister and was a mentor to Miles Warren.

He fought against Thor.

He recruited Hulk when his New Men revolted.

He recruited Adam Warlock to redeem Counter-Earth when it became corrupted. Warlock was eventually tricked into murdering High Evolutionary.

Galactus tried to consume Counter-Earth. Fantastic Four and Impossible Man helped save it, but Galactus became ill. High Evolutionary helped the planet eater become a being of pure energy.

Retrieved from "https://marvelanimated.fandom.com/wiki/High_Evolutionary?oldid=79726"
Community content is available under CC-BY-SA unless otherwise noted.