Heralds of Galactus are from the Yost Universe series The Avengers: Earth's Mightiest Heroes.

The Heralds of Galactus were four powerful beings who prepared planets for consumption by their master Galactus.

The four heralds were created by Galactus, having no life of their own, to serve him. They set up the Elemental Converters that Galactus uses to feed. They each have their own weapon, Terrax an ax, Air-Walker a scythe, Firelord a fighting staff, and Stardust a trident.

The four came to Earth intending help their master destroy it.

Air-Walker set his converter in a frozen tundra. He was confronted by Thor, Vision, Luke Cage, Black Widow, and Falcon. He was killed by Vision's forehead beam. 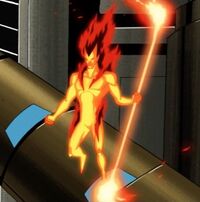 Firelord set his machine in a volcano. He was confronted by Winter Soldier, Hulk, Invisible Woman, Black Panther, and Ant-Man. He was killed when Hulk used his Thunderclap to blow him away. 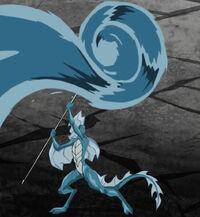 Stardust set his machine in the ocean. He was confronted by Thing, Wolverine, Human Torch, and Wasp. He was killed when Wasp flew into his body and blew him apart from the inside.

This is the first time that Silver Surfer, the most well-known herald, was not involved.

The four heralds depicted match four of the five classical elements. They are earth (Terrax), water (Stardust), fire (Firelord), and air (Air-Walker). It could be reasoned that Galactus himself represents the fifth element aether, which is the material that fills the region of the universe above the terrestrial sphere. The Fantastic Four are also based on this concept.

Human Torch and the Destroyer Armor have also been heralds at one point.

Air-Walker was killed. Firelord was released. Terrax was depowered.

Retrieved from "https://marvelanimated.fandom.com/wiki/Heralds_of_Galactus_(Yost_Universe)?oldid=70093"
Community content is available under CC-BY-SA unless otherwise noted.