Clint Barton, also known as Hawkeye, is a highly skilled archer and member of Force Works and Avengers.

Clint Barton once worked at Ringmaster’s circus but quit when he learned that it was a Circus of Crime. He then studied under the Swordsman on how to become a marksman.

Hawkeye was recruited by War Machine to join Force Works.

When Force Works relocated, Hawkeye was the first to leave, full of hatred of Tony and his constant "lone wolf" attitude. After being crushed by a tower, Iron Man saved his life by implementing a chip in the base of his spine. Asking for Clint's forgiveness for making Force Works split up, Hawkeye refused and the two went their separate ways. 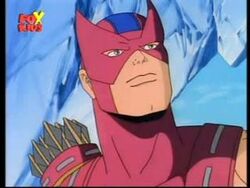 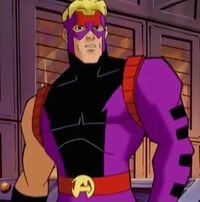 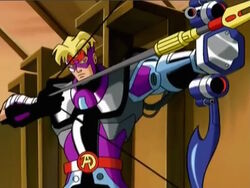 In Avengers, Hawkeye has power-armor and a suit for every occasion like most of the group.

Hawkeye was voiced by John Reilly on Iron Man and Tony Daniels on The Avengers: United They Stand.

The Clint Barton version of Goliath appeared on the Fantastic Four episode "To Battle the Living Planet", but there was no mention that it was Barton.