Happy Sam Sawyer was a captain in the United States Army during World War II.

During the war, Sawyer infiltrated the city of Paris, France during the Nazi occupation. He hid in the storage room of the Ferme Bakery being hid by Justine Cocteau.

He heard about a Nazi base in the Chateau du Mort under the command of Red Skull, who was also holding Justine's father Andre. He was going to debrief Canadian officer Logan about the mission.

He arranged for Captain America to help Logan while the Howling Commandos would provide backup.

Logan got the bakery and entered the storage room and found Sawyer through smell. Sawyer realized he was as good as people said and stepped out. 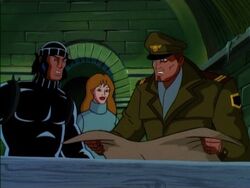 He introduced himself and set down his briefcase on the table. He pulled out a map and showed it to the two. He pointed out the chateau and told Logan that Cocteau was essential to their side. He explained that the chateau was on a remote mountain top almost inaccessible by normal means.

Sawyer ordered Logan that if he could not get Cocteau out of the chateau to "silence" the scientist. Logan accepted and rolled up the map. Sawyer told him that his backup would meet him along the way.

Logan put the map in his pack and explained that he works alone. Sawyer put away his briefcase claiming that Logan would like the guy.

As Logan tried to leave, Justine revealed to Logan that Andre was her father. Logan wasn't happy about the situation but left. She gave him a kiss before he went.

Retrieved from "https://marvelanimated.fandom.com/wiki/Happy_Sawyer?oldid=47146"
Community content is available under CC-BY-SA unless otherwise noted.