Halloween is a holiday that comes on the last day of October. It is a day of celebration typically centered on horror and the occult. 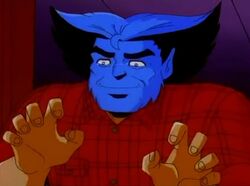 Houses are usually decorated with spooky decorations for the holiday. Sometimes, people living in the houses will wear masks to scare those who come to their doors.

People typically carve pumpkins into Jack-o'-Lanterns. They hollow out the center and carve a face into the side. The person then places a candle inside so it glows.

Children often dress up in costumes. Some are intended to be scary while others are simply characters or people the child enjoys. The costumes range in style from dinosaurs to superheroes. 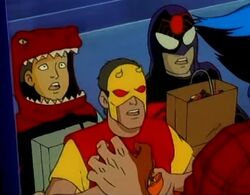 The exact history of Halloween is unknown. It apparently is rooted in darker occult-based parts of history. 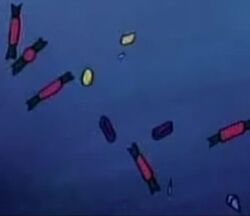 While Halloween has a long and ancient history, today most see it for trick or treating. Jubilee thought that Halloween was about getting a bunch of candy and then trying to eat it all in one night.

One year, the X-Men all left except for Logan and Jubilee who got stuck handing out candy.

The Xavier Mansion got into the spirit of things by handing out candy and carving pumpkins. They were visited by three children dressed as a dinosaur, a spider costume, and a yellow version of Daredevil's outfit.

Logan participated by handing out candy while scaring children with a Beast mask. The children ran at the site making Logan laugh. They left some of their candy behind. 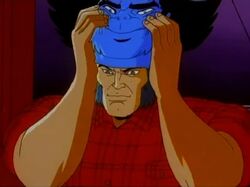 Jubilee told him Beast would probably be upset that Logan was using his face to give kids nightmares. He replied that that was the point.

Though not everyone is entirely happy with the holiday. Some are upset at how normal humans get to pretend to be mutants, like they would any monster. As Logan told Jubilee, "Every year it's the same. A bunch of brats run around dressed as monsters and mutants. Everybody says 'How cute.' Then, next day they get to go back to normal. Where do we go?" He then said the whole thing is sick, probably because most mutants can't take off any mask and be normal.

The day does present the opportunity for some mutants to go out into the real world and pretend to be dressed up. Nightcrawler was able to walk around with only a hat and trench coat without anyone bothering him. But afterwards everything returns to normal and those mutants must again hide.

One Halloween night, Nightcrawler came to the Xavier Mansion and asked for their help. He got a letter saying that if he did not come they would hurt his birth mother. Wolverine, Jubilee, and Rogue agreed to help and went with him.

The group went to the dam where the Friends of Humanity were keeping Kirk's mother, who turned out to be Mystique. There it was revealed that Rogue is Nightcrawler's adopted sister, and Graydon Creed is Nightcrawler's half brother. Creed tries to killed his family but they escaped.

During the firefight out of the complex, Mystique told Nightcrawler about his birth and why she abandoned him. Nightcrawler forgave her and then she apparently sacrificed herself when Creed attacked.

By the next morning, the Friends of Humanity were arrested and Creed was sent to see his father, Sabretooth, where he was last seen. 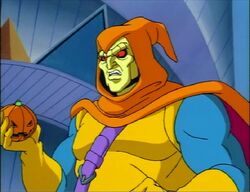 At some point, Jason Philip Macendale used a Halloween costume to become the supervillain Hobgoblin. He chose the persona as a way to strike fear into his enemies. He had Norman Osborn design weapons, such as pumpkin bombs, to go with the theme.

When Osborn became Green Goblin, he used the same weapons for a similar theme.

X-Men premiered its first episode, "Night of the Sentinels, Part One", on Halloween night.

Retrieved from "https://marvelanimated.fandom.com/wiki/Halloween?oldid=86791"
Community content is available under CC-BY-SA unless otherwise noted.