Guardians of the Galaxy is an upcoming series from Marvel Animation.

An unnamed source for JoBlo reportedly confirmed that a Guardians of the Galaxy series would be produced for a Fall 2015 debut. [2] 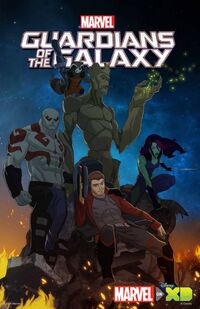 The Marvel Animation panel at the San Diego International Comic-Con in 2014 showed test footage from the series. The footage had Rocket Raccoon running from unknown attackers until he encounters Star-Lord. The panel revealed that a Guardians series had been planned since Ultimate Spider-Man. [3]

Head of Marvel Television Jeph Loeb said "This is a very exciting time for the Marvel Animation Studio as we get to explore the cosmic side of the Marvel Universe by developing the first-ever Marvel's Guardians of the Galaxy animated series. After starring in the biggest movie of 2014, everyone wants more of Star-Lord and his crew, now they'll get it." [1]

The line-up seen in the announcement image appears to be the same as the live-action 2014 film.

Retrieved from "https://marvelanimated.fandom.com/wiki/Guardians_of_the_Galaxy_(TV_Series)?oldid=45469"
Community content is available under CC-BY-SA unless otherwise noted.