Guardians of the Galaxy (TV Series)

Guardians of the Galaxy was a series from Marvel Animation. It was originally released on September 5th, 2015 and ended on June 9th, 2019.

The series focuses on the Guardians of the Galaxy featuring Star-Lord/Peter Quill, Rocket Raccoon, Groot, Gamora, and Drax. The newly-formed team finds an unknown object that only responds to Star-Lord's DNA. What follows is a story of redemption and of the importance of friendship as the Guardians seek out the Cosmic Seed, which is capable of recreating the universe. They must find and protect the Seed from those who would abuse it for their own purposes including Thanos, Collector, Grandmaster, Ronan, and Loki.[1]

Will Friedle said of the show's plot "The stories are so unbelievably intricate. It involves so many different characters. I love shows that are like a serial. I'm a fantasy book junky so I'm one of those guys where I like it when it's book one of ten, and they are all 1,000 pages long. With Guardians, can pick up in the middle, but you're going to want to go back to the start."[2]

Marvel Comics editor Steve Wacker suggested that a series based on the Guardians of the Galaxy was in the works. It was discussed at a writing summit for Disney XD's Ultimate Spider-Man. "Now, look, I can't officially confirm that we spent a LOT of time talking about the Guardians of the Galaxy cartoon but wouldn't that HYPOTHETICALLY... be amazing?" Wacker wrote. [3]

An unnamed source for JoBlo reportedly confirmed that a Guardians of the Galaxy series would be produced for a Fall 2015 debut. [4] 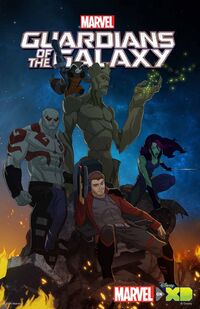 The Marvel Animation panel at the San Diego International Comic-Con in 2014 showed test footage from the series. The footage had Rocket Raccoon running from unknown attackers until he encounters Star-Lord. The panel revealed that a Guardians series had been planned since Ultimate Spider-Man. [5]

Head of Marvel Television Jeph Loeb said "This is a very exciting time for the Marvel Animation Studio as we get to explore the cosmic side of the Marvel Universe by developing the first-ever Marvel's Guardians of the Galaxy animated series. After starring in the biggest movie of 2014, everyone wants more of Star-Lord and his crew, now they'll get it."[6]

The series contains many elements of the films but is not a direct continuation. The producers were allowed to read the film's scripts, but only after they had completed their work on the series. Eric Radomski, Marvel senior vp and creative director of animation, said "They certainly aren't beholden to what we do. It's going to go wherever James Gunn decides it's going to go. Our stories pull from what we've learned from the movies and a lot of originality on the part of the writers in terms of creating new adventures with the characters."

Stephen Wacker, vice president of Marvel Animation, spoke about the disconnect between team seen on this show and on the other related shows. "I think the way that it works is that, if you squint and accept that this is the beginning of the team, then, as it goes on, it will all line up." He dubbed the series "Phase Two" of Marvel Animation, referring to the stages of the Marvel Cinematic Universe. "We've worked really hard over the last year to sort of bring a new energy across all our shows. We’re not marketing it as 'Phase Two' or anything, I'm just talking wise. We are trying to up our game, though. That's for sure."

Wacker revealed that Galactus would not appearing in the series, despite already appearing in continuity, as the film rights were not held by Marvel Studios. He said the Marvel cosmic universe is otherwise ripe for picking. He also called the Badoon "the most boring" of Marvel alien races. Both the film rights to Galactus and Badoon are held by 20th Century Fox though have appeared in Avengers Assemble and Hulk and the Agents of S.M.A.S.H..[7]

On October 9th, 2015, Marvel announced that the show would receive a second season that would begin in 2017.[8]

The series initially seemed part of the Marvel Animation Universe along with Ultimate Spider-Man, Avengers Assemble, and Hulk and the Agents of S.M.A.S.H.. The Guardians, mostly voiced by the same cast, has appeared in the other series before this one.

There was some crossover intended with the series. However, Wacker revealed they were careful to limit the interaction between the shows. They did not want to force viewers to have to watch everything to keep up. "There's a chase, a scavenger hunt, that we’re on throughout the whole season. That said, we've worked very hard to make sure each episode stands on its own. There's plenty of one-off adventures. There's a cowboy story. By the end, we get to a big, dramatic change for the entire team. We get to a moment people have been demanding for a long time."

It was later confirmed that this series is set in the same universe as Spider-Man and not the Marvel Animation Universe, along with the final season of Avengers Assemble.[9][10]

Cort Lane, head of animation development, said "I think we're upping our game in our approach to animation. Obviously, tonally, this is a little from the other shows. It's a real hybrid of character animation with a lot of CG assets and a lot of visual effects working together."

Sobolov said of returning to the role, "I've been living with Drax for awhile now. I don't really have a bag of tricks. I don't have forty voices up my sleeve. I don't think of them as 'voices.' I'm acting a part. I'm trying to be Drax as much as I can."

Friedle admitted he made a conscious effort to differentiate himself from Chris Pratt. "After watching the movie and knowing I was going to do this, the only thing going through my head was, 'You can’t be Chris Pratt.' I knew the best I could hope for would be a bad Chris Pratt imitation."

Richardson agreed, while also finding it difficult to bring a lot of range into Groot. "I wanted to stay as far away from the feature as possible. I wanted to see it, but didn’t want to do a Vin Diesel impersonation."

However, Marshall let herself be influenced by Zoe Saldana. "Zoe Saldana is brilliant in the role. Now having seen it, I try to pay homage to her energy and her curiosity as an alien. Luckily, these Marvel characters are so strong and it's a clear archetype. It's easy to plug into them and be of service to them to the point where it's really not even about us."

At some point they do intend to introduce other Guardians from the comics.

Marvel Music plans to release a physical and digital soundtrack for the show on October 16th, 2015 called Guardians of the Galaxy: Cosmic Mix Volume One. The collection would collect twelve songs from the first season. It is named after the soundtrack for the film.[11]

Finding popular songs to use in the show was a difficult task. Lane said "I was given a library of thousands of songs to comb through and then it was a process of elimination. Which songs fit the show and the stories we were trying to tell? Which songs had lyrics that were appropriate for young audiences? Which songs did the licensors think would be easy to license? We came up with a really amazing list. There were a couple that I can’t even say today that I desperately wanted and we got." 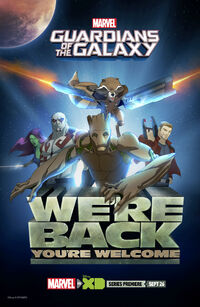 The ten two-minute shorts aired throughout August 2015. The first episode was seen in a sneak peak on September 5th while the series began regular airings September 26th.

The second season will began airing in 2017.

Similar to the other Marvel Animation series, Guardians will have a tie-in comic book series titled Marvel Universe: Guardians of the Galaxy. The series will be made by Joe Caramagna. He said of the child-friendly comic,[12]

"I love comics, especially super hero comics. If I want them to be around for my kids and my grandkids, we have to find that next generation of fans to keep the lights on for us when we're done. The more they read, the better they’ll read, and if they can read well, they can learn anything. That's why, in my opinion, encouraging our kids to read is the most important thing we can do as parents to prepare them for their future. I know from my own experience that having super heroes in movies and TV is a powerful tool for turning kids into comic book readers. Before I knew there were comic books, I was a fan of the animated series 'Spider-Man and His Amazing Friends.' So when I came across the comics, I was so excited! 'You mean there are Spider-Man books I can read? And they come out every month?! And there are hundreds of them?!' It’s not just me, I've spoken to many comic creators of my generation who've had a similar experience with that cartoon. And if you talk to some of the new talent coming in now, they had a similar experience with the X-Men animated series in the 90's. Because of Marvel's great success in movies and TV, we've never had a better opportunity to catch the attention of young people on the outside and invite them in to share our universe. To keep all of this from reading like a dry information dump, I make an extra effort to keep as much of the humor and great character moments that represent the heart and soul of the series as I can. And if I can't, I have to create my own, which means getting to know these characters and their relationships inside and out through watching, re-watching, pausing, rewinding. And as a rule I keep at least one Spider-Man cutaway gag per issue, even though they're mostly not essential to the plot. Because they're great! To keep them reading, the stories have to be fun and accessible, meaning they should be able to pick up any issue of the series and enjoy it without feeling lost." 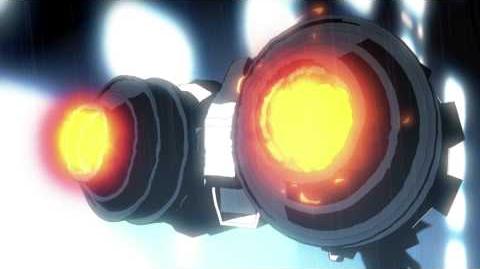 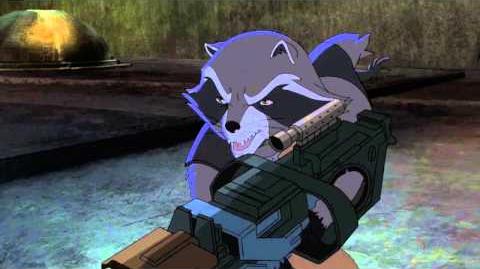 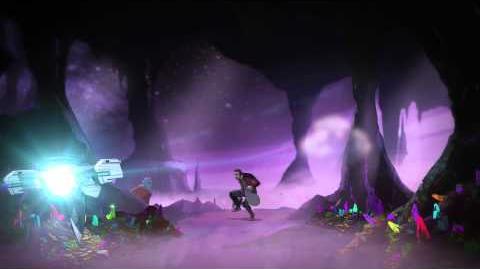 The trailer uses Hooked on a Feeling by Blue Swede in the same way the trailers for the Guardians of the Galaxy film did.