Grim Reaper is from the Yost Universe series The Avengers: Earth's Mightiest Heroes.

Eric Williams is a high-level HYDRA agent and assassin who goes under the name Grim Reaper.

Little is known about the early life of Eric Williams. He is brothers with Simon Williams, who went on to start a technology company. 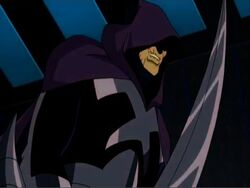 At some point his right arm had an implant that gave him a large metal scythe. He went to work for HYDRA and became of their top agents.

In order to break out his leader, Baron Strucker, Eric disguised himself as a low-level HYDRA soldier as they attacked the United Nations. They were defeated by Iron Man and arrested by S.H.I.E.L.D.. They were taken to the Vault where Eric attacked the guards. He freed Strucker and nearly escaped. However, he was taken down by Nick Fury and Maria Hill and captured.

Later, the Vault experienced a massive power outage releasing all of the inmates. Eric escaped with Strucker and both returned to HYDRA.

The two were at a HYDRA meeting when Baron Zemo appeared wanting help since Captain America had returned. They refused and Zemo set out to defeat the World War II hero himself.

When Tony Stark bought out his brother's company, Eric went to Simon to help. Simon wanted revenge so he took him to MODOC of A.I.M.. MODOC turned Simon into living energy and he took on the name Wonder Man. However, Simon was defeated by the Avengers.

Grim Reaper went with other HYDRA soldiers to Wakanda with Klaw to steal some Vibranium. Wakandan king Man-Ape threatened to kill him if HYDRA betrayed him. He fought with Wasp when T'Challa brought the Avengers to the country to reclaim his family's throne. Grim Reaper accidentally knocked Klaw off a platform where he was then transformed into a being made of sound. Grim Reaper and HYDRA escaped with some vibranium.

HYDRA tried to make a deal with A.I.M. to make a powerful cube. However, A.I.M. claimed they could not do anything and gave back the money HYDRA sent them. Grim Reaper was suspicious and they learned that A.I.M. had made a powerful cube. HYDRA and the Avengers attacked A.I.M., not knowing that Hawkeye had put a tracer on Grim Reaper. During the fight all sides came to believe that the cube had not worked at all.

This version of Grim Reaper has a hood, similar to the mythological personification of Death, rather than the helmet seen in the comics.

Retrieved from "https://marvelanimated.fandom.com/wiki/Grim_Reaper_(Yost_Universe)?oldid=68211"
Community content is available under CC-BY-SA unless otherwise noted.