Gambit is from the Non MAU series X-Men: Evolution.

Remy LeBeau, better known by his codename Gambit, is a mutant and one of Magneto's Acolytes.

Gambit was approached by Magneto to join the Acolytes along with Colossus, Sabretooth, and Pyro.

When he first battled the X-Men, Rogue tried to sneak up on him, but, he was prepared with a charged card. However, she did appear smitten with him. 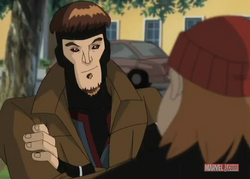 He met up with Avalanche after he was kicked out of high school and told him that he'd be needing his help. He told Avalanche he would meet him at his house before he warned several high school jocks not to mess with any mutants before being seen by Rogue. 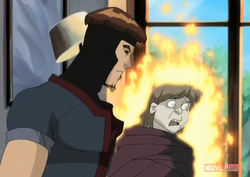 When Gambit arrived at the house the Brotherhood stayed in, he was attacked by Toad, Blob and Avalanche. He stopped the fight when he grabbed Toad, tied him up and warned them that he would let Toad explode if they didn't listen to him. He told them to free Quicksilver, who he referred to as "a captured mutant".

Later, Gambit was hypnotized by Mesmero into helping him release the ancient mutant Apocalypse. When Rogue, under Mesmero's control, attacked the Acolytes Gambit held off the best but eventually fell when she kissed him.

At one point he found out that his adopted father, Jean-Luc LeBeau, was kidnapped by the Rippers. He kidnapped Rogue to help him find Jean-Luc. There wasn't much information on Jean-Luc except for a previous conversation with him and Gambit. Gambit found and untied his father. Jean-Luc wanted Remy to help him raid the Ripper's mansion. Gambit says "You don' need me for that." Jean-Luc replied that it was true, but he needed Gambit's powers. Gambit sais "I was right. Nothing has changed" and walked away.

After the Acolytes, Brotherhood of Mutants, and X-Men defeated Apocalypse and his Horseman of Apocalypse, Charles Xavier saw a vision of Gambit as an X-Man.

Gambit's abilities consist of the ability to touch objects and cause them to be eletcrically charged to the point of exploding. He can control this by deciding if he wants something to explode, or not.

Gambit seems to have an unspoken, and complicated friendship with Rogue.

Jean-Luc is Gambit's adoptive father. Jean-Luc has shown his love for Gambit's powers, but not much concern for Gambit himself. Although Gambit is well aware of where his father's affections lie, he seems to still care for his adoptive father to an extent where he risked his own life, and Rogue's, to save Jean-Luc.

Gambit's relationship with magneto is strictly business. The moment magneto was thought to be dead, Gambit and most of the other Acolytes scattered back to where they came from.

Gambit was voiced by Alessandro Juliani.

In his first appearance, Gambit had normal eyes (black iris and white sclera). They were later changed to match the comics (red iris and black sclera).

Gambit has not been an Acolyte, but he has been a Horseman.

He's an X-Man and has a relationship with Rogue.

He has a good friendship with Jubilee.

Retrieved from "https://marvelanimated.fandom.com/wiki/Gambit_(X-Men:_Evolution)?oldid=35660"
Community content is available under CC-BY-SA unless otherwise noted.