At some point, Gambit joined the X-Men. According to Wolverine, he was "never straight with them". Despite this, Gambit helped the team and became a valuable member.

One night, he was buying cards from a store in the mall. He flirted with the female clerk before Sentinels arrived at the mall, chasing after a young girl named Jubilee. Gambit left the store and assisted her by shooting cards at the Sentinels before being momentarily knocked down. Gambit warned Jubilee to keep running. After Jubilee was saved by Gambit and the others, Gambit had a training exercise with Wolverine. Gambit was helped in defeating Wolverine by Jubilee, who believed that he was in a real fight with him. Later, Gambit saved Jubilee after she left the base and was captured. When he asked her if she missed him, she hugged him and Gambit assumed that was indication that she had.

Gambit partook in a training exercise with Rogue, Jean, Storm and Jubilee. He used his cards to destroy several machines before Xavier stopped it and talked about Morph briefly. Gambit was shot at by several blast that Xavier activated with a button. As ordered by Storm, he disabled the targeting cameras. He, Jubilee and Jean tried to slow down a wall in the Danger Room before Storm went ballistic. After Jean and Cyclops were captured, Gambit went with Storm, Wolverine and Rogue to find them, commenting that they find weird places to hangout. When Wolverine told them he was getting someone's scent, Gambit told him that they might be tracking them. The four were attacked by a Morlocks and one hit Gambit and Wolverine and stuck the two to the wall. After the confrontation, Gambit went with the three into a tunnel. As Storm's claustrophobia started to affect her, Gambit told Wolverine to help her, believing she wouldn't make it. When the group found Jean and fought several Morlocks in an attempt to find Cyclops. While fighting, he was about to throw a card before an old Morlock woman got in his way. Using her powers on him, Gambit was convinced he had the plague and taken back to the mansion by Rogue.

Gambit was present when Xavier told Cyclops to select three X-Men to go to an island. He was picked by Cyclops to be second leader of the team, following Storm.

Gambit went with Storm and Jubilee to Genosha, an island in which mutants could apparently rest without worries of prosecution just for being different from ordinary humans. At first, Gambit took a liking to the island, before being abducted from his new home to work as slaves along with Jubilee, Storm and some other mutants. He managed to escape the island and looked for a way to get the shock collar off of him and the others. He ran into Cable, who gave him a device able to do so. When he returned to the island, he used the device to liberate all of the mutants on the island.

While former X-Man Angel was being controlled by Apocalypse, Gambit played pool with Rogue. When Rogue told him that he was behind, Gambit assured her that she had not won yet and told her that she needed incentive, alluding to Gambit wanting a kiss. When Rogue asked him if he wanted to be in a hospital, Gambit assured her that he had plenty of energy. Gambit's pool skills were sabotaged by Jean and were commented on by Storm, who Gambit was surprised to see make a joke.

Gambit went with Cyclops, Wolverine, Jean and Storm to fight of Apocalypse's horsemen. He saved Wolverine, by throwing an explosive card at a pillar that was about to collapse on him. Gambit went with the four and regrouped with Rogue to defeat Apocalypse and his horsemen. After Archangel shot the rest of the horsemen, Gambit and the other X-Men prepared to defeat Apocalypse, before he escaped.

The time traveler Bishop accused Gambit of betraying the X-Men by assassinating the Senator Robert Kelly. Gambit arrived and was shot at by Bishop before the other X-Men restrained him. As Gambit tried to convince the other X-Men that he was not the assassin, he realized no one believed him and became angry with his team. Gambit tried to sneak out of the mansion, before being caught by Wolverine, Bishop and Professor X. Gambit told them that he was going to stop the assassination from taking place, to which Xavier ordered him to stay at the mansion with Wolverine and Bishop. Gambit stayed at the base with the two, before causing a card to explode and running out of the room. Gambit managed to escape from them and leave. The traitor was later discovered to be the shape-shifting Mystique disguised as Gambit when Gambit confronted her posing as him. After Gambit took Mystique out, Bishop arrived. Gambit and Mystique posing as Gambit both tried to convince Bishop that they were the real Gambit before Bishop shot at both of them.

Gambit went with Cyclops, Storm, Wolverine and Rogue to get senator Kelly to safety. Gambit and the others went into destroyed Sentinels, in hopes of finding Magneto. Gambit screamed out Magneto's name. Back at the Xavier Mansion, Gambit was asked by Xavier if he would allow him to go through his memories. Worriedly, Gambit asked if he wouldn't go to far back. Upon agreeing, Gambit allowed him to go through his memories until Xavier caught the same man that abducted Jubilee. Gambit asked Xavier why he would allow them to almost die to help one of the mutant's worst enemies. Gambit and Cyclops destroyed several Sentinels and regrouped with Rogue and Jean. Upon regrouping, Gambit was kissed by Rogue. Gambit responded by saying that he did not understand her.

Gambit attended Scott and Jean's wedding. While at the wedding, he succeeded in giving a kiss to Jean and failed in an attempt to give Rogue a kiss. He and the rest of the X-Men were later attacked by a returning Morph, who was revealed to be alive and working for Mister Sinister. When Morph morphed into Rogue, Gambit was convinced by him that Rogue had been lying about not being able to touch and to meet her up in a room in the mansion. Upon entering the room and seeing Rogue asleep, Gambit kissed her. He then knocked out and woke Rogue up, who gained his powers. 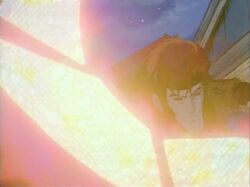 Gambit has the ability to change objects with explosive charges of kinetic energy that his body produces from non-organic matter. He commonly does this to playing cards since he can easily store them and throw the cards. However, this means he goes through them quickly and is often buying new packs of cards. He can also do this to other objects, such as a brick, but does this less often.

Gambit also regularly exercises and has the skills of a master thief.

Gambit was voiced by Chris Potter. Tony Daniels took over for the character in "Phalanx Covenant, Part Two", "Hidden Agendas", and "Graduation Day".

This is the first version of the character outside the comics.

When casting Gambit, the producers had in mind a heavy Cajun, primitive French voice that was mysterious and sexy.[1]

According to Eric Lewald, "We set up the character of Gambit to be mysterious, in part because in 1992 we, and even Marvel, knew so little about him." His backstory seen in "X-Ternally Yours" was developed simultaneously with the comics. The comics were released two months before the airing of the episode.[2]

As of Wolverine and the X-Men, this is the only animated version of Gambit that is part of the X-Men.

IGN ranked this version of Gambit at number eighteen among their top ninety animated characters of the 1990s. He is the second highest Marvel character on the list above Beast, Rogue, and Spider-Man but below Wolverine. They said, "While Gambit in the comics always left a bit to be desired, he was a fun and savvy rogue on the animated X-Men TV show. Between the slick card tricks, flowing trench coat, and charming Cajun accent, the guy was just plain cool. So cool that we never even questioned why he was wearing a head sock with a face hole cut out. He was so popular they even made him the central figure of the show’s Days of Future Past adaption. Not bad, Cheré."[3]

He was hired by Mister Sinister to steal diaries from Weapon X. He went to the facility and saw Wolverine escaping after he had been bonded with adamantium. During that time, he hated the cold and swore that he would get a long jacket to wear.

Remy married Bella Donna. However, his brother Julien challenged him at the wedding and they fought until Julien was killed. Remy was exiled from the city and his relationship with Bella Donna ended.

Mister Sinister later hired Gambit for a series of jobs. The last one saw Remy leading a group called the Marauders into the Morlock tunnels. He led Sabretooth, Blockbuster, Prism, and Riptide whose real mission, to kill all the Morlocks, was unknown to him. He was unable to stop them and only managed to save one, Marrow. He kept his involvement in the massacre secret from the other X-Men. His secrets are hinted at in the series but never directly addressed.

While wandering the world, he encountered a de-powered and de-aged Storm. He helped her escape from Shadow King then taught her how to steal. When she returned to the X-Men she brought him with her.

He was temporarily controlled by Shadow King.

He encountered the Daniel Ketch version of Ghost Rider after he met his ex-wife Bella Donna and fought her. Gambit later fought against Ghost Rider when he was possessed by the Brood.

Magneto, disguised as Erik the Red, brought Gambit before a mock-trial for his role in the Morlock Massacre. Rogue kissed him and discovered his memories of the events. He was left in Antarctica by Rogue, however she came to regret this and searched for him, but could never find him. Gambit eventually came back to the team.

He rejoined the team after meeting Storm and Shadowcat while trying to steal the Crimson Gem of Cyttorak, mostly out of respect for Rogue. The two got back together but she broke it off for fear of her powers hurting him. The two would get back together, but they ended up losing their powers. They soon left the X-Men where they ended up living together for a time.

He was not blamed for the Days of Future Past but another dystopian future called Future Imperfect, which is where Bishop comes from. In that time, Gambit was known only as "The Witness" and Bishop came to see him. When Bishop went back in time, he thought Gambit had killed all the X-Men. It was later revealed to be a supervillain called Onslaught.

Has been Death in the Horsemen of Apocalypse.

He has also been a member of X-Factor.