Galactus is a cosmic being who consumes entire worlds. He has heralds to proclaim his arrival on each targeted world he chooses to consume.

Galactus was responsible for the destruction of the homeland of the Skrulls.

Galactus reach Earth. He sent his four heralds, Terrax, Firelord, Stardust, and Air-Walker, across the globe to install energy conduit towers that would prepare the planet for consumption.

Various heroes from the plaent divided into groups to destroy each tower and his Herald. One team formed of Mister Fantastic, Doc Samson, Iron Man, Ms. Marvel, and Yellowjacket boarded his ship to confront him.

Each Energy Conversion Tower was destroyed. Galactus teleported himself to the surface and reassembled his towers using his remaining power. He began to feed to himself.

While the Avengers battled Galactus, Mister Fantastic and Iron Man made a portal to the Negative Zone. They keyed it to the energy signature of Galactus' cosmic energy. Galactus resisted going, trying to pull himself back into the universe, but a concentrated blast from both Iron Man and Thor sent him through the portal, which sealed behind him. 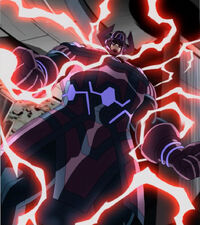 Galactus wields enormously strong cosmic-based power. This allows him to shoot the energies and manipulate other kinds of matter and energies. It also makes him seemingly immortal.

His immense size gives him seemingly unlimited strength and durability.

The first animated version that does not speak, and the first version to be seen without Silver Surfer.

The four heralds represent the classical elements, much like the original concept of the Fantastic Four. It could be reasoned that Galactus himself represents the fifth element aether, which is the material that fills the region of the universe above the terrestrial sphere.

The following year, Marvel Comics would defeat Galactus in a similar way to "Avengers Assemble!". In the story Cataclysm, Galactus is pulled into the Ultimate universe where he merges with his alternate universe counterpart, Gah Lak Tus. He attacks the Kree and Chitauri, the Ultimate versions of the Skrulls, then heads to Earth. The heroes of this Earth travel to Earth-616 to find out how to defeat him. Kitty Pryde uses Pym Particles to grow in size and destroy his device. Mister Fantastic then sends him into the Negative Zone. However, he eventually found his way out and returned to the 616 universe.