Freeway is from the Funko Universe short Chimichangas.

A freeway is a controlled-access highway designed for high speed driving. It moves continuously with vehicles getting on and off at various access points.

While going through cities, freeways are often elevated above the normal city streets as to allow constant movement. Numerous freeways and other major roads intersect at an interchange. 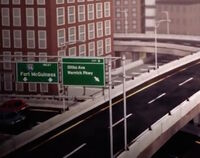 Interstate 96 is one such freeway. In one city that it passes through it has an exit for Fort McGuinness as well as Ditko Avenue and Wernick Parkway.

One day, Venom attacked vehicles along a freeway interchange. Deadpool arrived in his food truck and defeated him with a jalapeno-stuffed chimichanga.

Retrieved from "https://marvelanimated.fandom.com/wiki/Freeway_(Funko_Universe)?oldid=57815"
Community content is available under CC-BY-SA unless otherwise noted.