Fred, also known as Fredzilla, is a superhero and member of Big Hero 6. 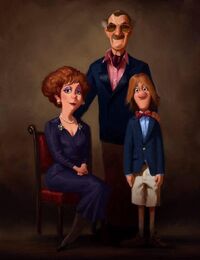 Fred is a fan of monster movies and the school mascot of the San Fransokyo Institute of Technology. When he and his friends became superheroes, he wore a suit that turned him into a fire-breathing monster. After the fight with Yokai, he discovered that his father was a superhero who kept an armory in their mansion.

Fred is voiced by T. J. Miller in the film Big Hero 6 and Brooks Wheelan on the series Big Hero 6.

Actually transforms into a giant monster.

Retrieved from "https://marvelanimated.fandom.com/wiki/Fredzilla_(Big_Hero_6)?oldid=88937"
Community content is available under CC-BY-SA unless otherwise noted.