Fin Fang Foom is a large alien creature that resembles a dragon.

Centuries ago, Fin Fang Foom and his four brethren crashed onto Earth. His companions changed their bodies to resemble humans while he remained in his true form. They took their technology and formed ten extremely powerful rings.

Eventually the rings found their way to Mandarin. He took control of them and formed The Hand with Fin Fang Foom as a member. Fin Fang Foom helped them attacked Iron Man and Force Works, though they were always defeated. 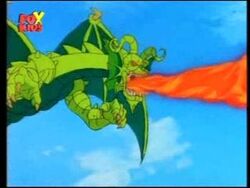 Eventually, Fin Fang Foom and his fellow aliens gathered once more. Mandarin was seemingly killed in an explosion and the rings scattered across the planet. None of the aliens were seen again.

His name translates to "He Whose Limbs Shatter Mountains and Whose Back Scrapes the Sun."

Mandarin teamed up with Iron Man and War Machine to defeat Fin Fang Foom and his allies.

Retrieved from "https://marvelanimated.fandom.com/wiki/Fin_Fang_Foom?oldid=98762"
Community content is available under CC-BY-SA unless otherwise noted.