The Fashion Warriors were a group of female models who teamed up to fight the Gamma Warriors. 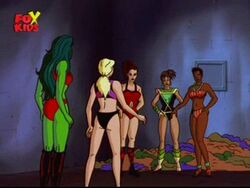 The five women were performing at a fashion show featuring strong professional women. However, the Gamma Warriors attacked and captured all but the models. They snuck through the building and eventually defeated the villains. They later joked they would write a tell-all book.

An original group to the show.

Retrieved from "https://marvelanimated.fandom.com/wiki/Fashion_Warriors?oldid=58537"
Community content is available under CC-BY-SA unless otherwise noted.