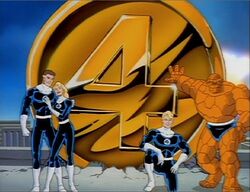 Fantastic Four debuted alongside the animated Iron Man series as part The Marvel Action Hour, comprising the second half. Before the episode, Stan Lee would have a short segment speaking about the characters, situations, and inspirations.

Larry Houston left working on X-Men to take over for the show's second season. "Having the freedom to accurately depict and adapt the classic Fantastic Four stories was the main reason that, after directing the first four years of the X-Men, I left the series. I grew up on Marvel in the 60s. With so many of those Kirby/Lee stories embedded in my imagination for decades, I had to jump at the chance to do them right. My personal approach has always been to adapt any book/story and follow it as closely as possible. You have to change things, when going from a book to moving cinema. But you only changes things when you have to, NOT because you can."[1]

Quinton Flynn was the only actor to reprise his role for the team's appearance on Spider-Man. John Semper, Jr. disliked the Fantastic Four and didn't want the voice cast to join in.

During the first season critics and fans were disappointed with the show's more silly dialogue, crude animation, plot holes, and claimed the opening song was more annoying than anything else. Though fans believed that the second season had improved in every area. The Johnny Storm actor was replaced, Thing had less campy dialogue, a more heroic theme featuring no lyrics, and the writing became generally more mature. However, ratings still dropped, probably from the poor first season, and the series was not picked up for a third season. 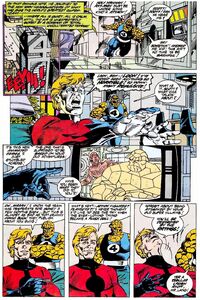 Fantastic Four comic writer Tom DeFalco parodied the series in Fantastic Four #396. In it, the Scott Lang version of Ant-Man, who was then a member of the team, found a fictional series based on the Fantastic Four and ridiculed Thing for being desperate for money. DeFalco reportedly got into some trouble for it. It happened to the final issue DeFalco served as Editor-in-Chief for Marvel.[2]