For the bird, see Falcon (Animal).

Samuel Wilson, also known as Falcon, is a member of the Avengers. 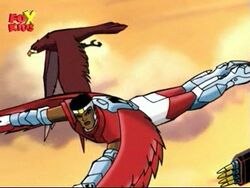 He trained a bird called Redwing to be his sidekick.

Falcon joined the Avengers following an attack on the President of the United States of America alongside Vision. He seems to have a relationship with Tigra.

Falcon was voiced by Martin Roach.

Retrieved from "https://marvelanimated.fandom.com/wiki/Falcon?oldid=89564"
Community content is available under CC-BY-SA unless otherwise noted.