Ernie is a veteran of the United States of America military. He fought in World War II.

His life and the lives of two others were saved by a man named Duke. During the war, he fought with a man named Logan.

At some point, Ernie found a bistro near the Eiffel Tower in Paris, France.

After fifty years, the three men Duke had saved got together and went to the cemetery where Duke was buried. They dressed in the military uniforms and went out on a breezy day.

The three old veterans looked onto a grave, remembering their friend and ally Duke. They thanked their fallen comrade for saving their lives. The three stood at attention and saluted.

The three finished their salute and Ernie told the others about the nearby bistro. As they turned he began to offer them the first round, but was stopped when he saw a man near another grave that looked just like Logan. The man stood alone in a long trench coat. Ernie believed it was Logan but realized that it could not be him. 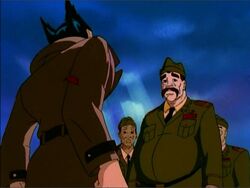 The three walked over to the man. Ernie called out to him once again believing him to be Logan. The man turned around asking if he could help. Ernie stopped, realizing that the man was too young to be Logan, and explained that he looked just like someone he knew back in World War II.

Ernie thought that maybe the man he knew was this man's father. They tell him to take care and left to the bistro.

Presumably, Justine Cocteau brought the man, who really was Logan, to the same bistro.

An original character to the series.

Retrieved from "https://marvelanimated.fandom.com/wiki/Ernie?oldid=33619"
Community content is available under CC-BY-SA unless otherwise noted.