When everything seems to be going right for the X-Men can they stay together while facing enemies from without and within? 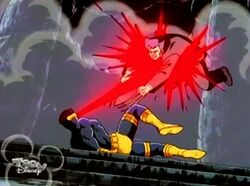 Cyclops, in his uniform, runs around a dusty abandoned building while Logan, in a nice suit, chases after him.

Meanwhile, at a church Scott is getting married to Jean Grey. The wedding goes on at the same time Logan and Cyclops are fighting.

Logan stabs Cyclops and he is revealed to be a robot with the holographic image of Cyclops that can shoot lasers. Logan decapitates the robot but is attacked by another "Cyclops" from behind. This one turns into a large Sentinel-like robot. Logan decapitates this one but even without its body it proves to be dangerous.

At the reception Jean senses Logan's distress and leaves. Remy tries to kiss Rogue as part of a Cajun tradition but she stops him. Scott asks the Reverend to stay but he says that he has other commitments and must go. 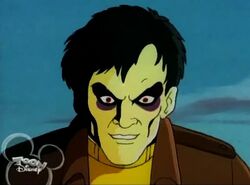 Outside, the reverend suddenly becomes the long lost, and thought dead, Morph.

Meanwhile, during Robert Kelly's inauguration a man dresses himself as a monster.

Back at the Xavier Mansion Jean throws the bouquet. Jubilee wants it, but Rogue tells her she is too young. However, it is Beast who ends up with it.

At the White House Kelly's first act as President is issuing a full pardon to Dr. Henry McCoy. 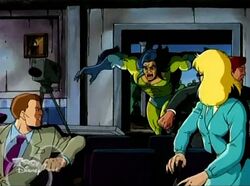 Just as he does a mysterious man speaks into a communicator and the monster dressed man bursts into the room. Before he is captured he breaks a window and runs out. The man mysteriously says that phase one is complete and to begin phase two.

In the Danger Room Logan, now beaten and battered, is greeted by Jean Grey. He makes an excuse as to why he didn't show up at the wedding, but she has to leave to catch a plane with Scott. 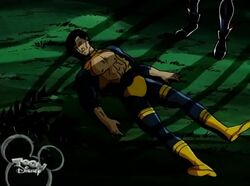 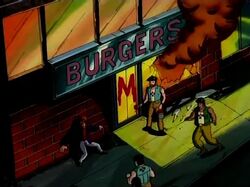 A gang running loose sets fire to a burger place and spray paints a large M on the door. They also surround a mutant who only appears different and has no powers to speak of. They attack various places that advertise that they serve mutants and chase two Morlocks through the streets.

No one knows why this group is doing this except for Charles Xavier. When the X-Men saved Kelly's life he switched positions and became a supporter for mutant rights. His then-followers felt betrayed and went out on their own.

Storm wants to stand up to these men or else their intolerance will grow. Xavier gets a message on his private video line and leaves.

The message is from Magneto. He appears in great pain and desperately seeks his help. He tells Xavier to meet him at a certain point, in Antarctica.

However, it is revealed to be only Morph standing in front of a screen projecting fire.

Logan, Gambit, and Beast are playing pool when an explosion goes off. The place is being attacked for serving mutants.

During the fray Beast takes a man's rifle away from him, unbeknownst that he is being filmed. After the gang leaves the three hear police sirens and decide that a crime scene is not the best place for a person recently pardoned. 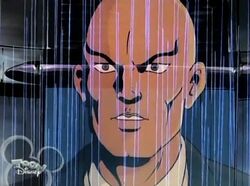 At the mansion, the X-Men view a message from Xavier telling him he had to leave on a personal mission and that Storm will be in charge until Cyclops gets back. Jubilee then tells them about a news report showing Beast wielding the weapon and "attacking" a car of civilians.

The gang set them up so their defense appeared as an attack. Storm wishes to expose this new anti-mutant conspiracy and not add to the fire, but Wolverine simply wants to go after them.

Morph witnesses Wolverine leaving in his Jeep and turns into him with the intention of causing some mayhem. He passes Rogue who tells him that she's going to sleep in the rec room.

Morph then becomes Rogue and begins flirting with Gambit. Morph-as-Rogue says that she's been lying and can touch others, and to meet her in the rec room soon to find out. Outside the War Room Morph becomes Storm and tells Jubilee to go to a mutant halfway home where violence is expected to occur.

In the rec room, Gambit finds the real Rogue sleeping. He kisses her thinking that is what she wants but instead she absorbs his powers and he falls unconscious.

Jubilee arrives at a Veteran's Club only to find it filled with the gang members.

Storm watches the news as more anti-mutant violence breaks out. Rogue enters with the unconscious Gambit and the inability to control his powers. Storm decides to try to help but cannot find Jubilee. However, Beast promises that if they go on ahead he will catch up.

Of course this Beast turns out to be Morph and the real Beast is in the Danger Room training. Morph then turns the danger level to high and watches as Beast jumps and flips for his life.

In the streets, the gang attacks and sets fire to a Mutant Counseling Center.

Rogue and Storm arrive to put out the fire and to try to stop the gang. Rogue leaves after Storm assures her that she can handle the gang alone until Beast arrives. 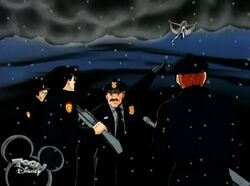 Morph arrives wanting to see his former friends pay. When the police do nothing he transforms and orders them to fire on Storm with full power. Storm is hit multiple times and is taken away in an ambulance. 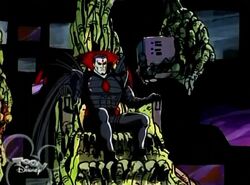 A mysterious person watches news footage of Storm being taken away and wishes Morph good luck with his revenge. Just as he's having with his.

-Logan to the Cyclops android

"Where I come from we always kiss the bride."

"I have promises to keep, and miles to go before I sleep."

-Reverend (Morph) quoting Stopping by Woods on a Snowy Evening

"I, Robert Jefferson Kelly, do solemnly swear that I will defend the Constitution of the United States of America, and that I will faithfully execute the duties of the office of the President."

"No fair flying Rogue"
"Gal, you're too young to be catching bouquets anyways."

"What's in a name? That which we call a rose, by any other name would smell as sweet."

"You were elected to protect us from mutants! Mutant lovers!"

"We missed you at the wedding."
"I...I must have lost track of time. I'm sorry I couldn't be there."

"You will destroy them all."

-Logan to a Friends of Humanity member

"Looks like I keep you waitin' too long. Or maybe you want me to wake you up with a kiss."

"Gambit, you could not have chosen a worse time to be a fool."

"Good luck with your revenge Morph. I know I am."

Originally, Morph was intended to be a throwaway character, an attempt by the show's creators to show the dangers the X-Men face, that even one of their members can die. But he proved so popular in his two appearances, he was brought back in a large role for season two and would reappear throughout the series.

In the comics, Senator Kelly was seeking the presidency when he was killed. He was killed by an anti-mutant extremist who felt betrayed that Kelly softened his stance on mutants, like the attack in this episode, though he did not fully abandon them.

"Stu" of Marvel Animation Age praised the new animation that came with this season. He felt that Sinister made an excellent villain, and unlike Magneto was really evil, and even "scared the crap out of" him. The FoH were the perfect enemies for the X-Men, a symbol of the prejudice that they fought against. Morph coming back was not only a major surprise but shocking to see what he had become.

Comic Book Resources ranked this episode and its follow-up at number nine in their top fifteen episodes of the series. They noted that Mister Sinister was always one of the team's deadliest villains and the episode introduced him in a perfect way. They noted how the episode was able to tap into the disturbing aspect of him being obsessed with Jean and Cyclops. They also liked the fight between the X-Men and Nasty Boys. [1]

The episode has a 9.1 superb rating on TV.com.

Retrieved from "https://marvelanimated.fandom.com/wiki/Episode:Till_Death_Do_Us_Part,_Part_One?oldid=61888"
Community content is available under CC-BY-SA unless otherwise noted.