A mysterious new figure arrives just as Spider-Man seems to have gone bad. Can Spider-Man convince the world that he's still the friendly neighborhood web-slinger? 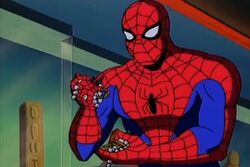 The metropolitan museum security are alerted to a break-in in the Egyptian Room. They investigate and meet the intruder, who appears to be Spider-Man. Spider-Man webs them up before taking a bag of diamonds and making his escape. The act is caught on CCTV. 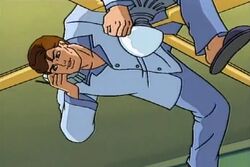 The following morning, Peter Parker is woken up by a call from Mary Jane Watson, who bombards him with plenty of science questions to start his day. She asks him why non-planetary masses don't exert gravitation forces, to which Peter responds that they do indeed exert gravitation force, but it is very minute. Peter is thrilled when Mary Jane suggests a date on Friday evening so he can help her revise for her Physics test on Monday. 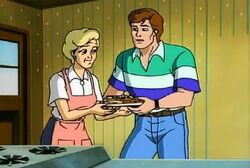 After hanging up, Peter goes downstairs, but his good mood takes a turn when his Aunt May points out the footage of Spider-Man robbing the museum on television. However, he doesn't believe it and tells her that it's impossible.

Peter leaves for work, and is called to the museum where J. Jonah Jameson is already stationed. After getting disciplined by Jameson for not handing in any photos that morning, Peter decides to look around the building for clues. 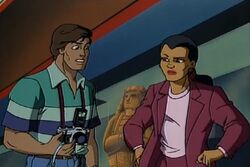 He finds some of "Spider-Man"'s webbing, but is stopped by Detective Terri Lee, who tells him that she could bust him for removing evidence. However, he tells her that it could not be Spider-Man's webbing since it would have already dissolved, but she isn't convinced. 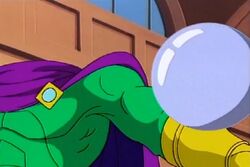 Suddenly, a mysterious figure who calls himself Mysterio appears and shows off some of his magic, promising the crowd that he will catch Spider-Man, before making his exit. As he leaves, he creates an illusion of the museum roof caving in, but Peter's Spider-Sense allows him to dismiss it as fake.

On the public bus, Peter is confused at recent events; how his alter ego must have been framed and also the Mysterio character. He hears on the radio of another incident involving Spider-Man, this time at the Brooklyn Bridge mall. He promptly gets off the bus and plans to intercept the imposter. 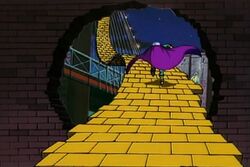 At the mall, the fake Spider-Man is stealing and scaring civilians. When the real Spider-Man arrives, he spots Mysterio and realizes that he must be the one framing him with his illusions. Mysterio challenges Spider-Man, but says that it must be on top of the Brooklyn Bridge, the same place where he claims that Spider-Man ruined him. 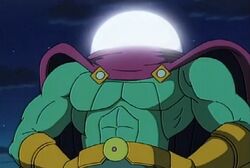 While Mysterio is on top of the bridge, many civilians are standing at the bottom cheering him on, believing Spider-Man to be the villain. When Spider-Man arrives to fight him, Mysterio uses a real trick to push him off the bridge. Spider-Man clings to the side, but Mysterio sends a pile of rubble on top of him. Spider-Man thinks it must be just another illusion, but it turns out to be real and he plunges into the water. After, a group of helicopters search for Spider-Man in the water, but conclude that he must have drowned. However, he emerges safely and heads home. 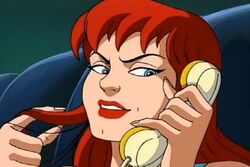 At home, Peter angrily watches Jameson's news broadcast calling Spider-Man a villain and praising Mysterio as a hero for his "defeat" of Spider-Man. Mary Jane then calls, upset at Peter for missing their date. He offers to take her out but she says he had his chance. After she hangs up on him, an agitated Peter vows to quit his life as Spider-Man once and for all.

Terri Lee appears at the door to tell Peter that she believes Spider-Man has been set up. She says it is his chance to help an innocent man, but Peter declines the offer. She tells him that Spider-Man never turned his back when he was needed, before leaving in her vehicle. 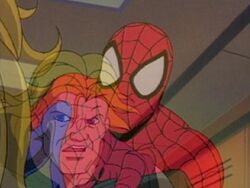 Terri's words get Peter thinking, and he realizes that she is correct that Spider-Man never turned his back, except for once, when he was partly responsible for the death of his Uncle Ben because he failed to stop an escaping crook. He then decides to pay Detective Lee a visit under the guise of Spider-Man, and goes after her car.

They access a computer, and Spider-Man tells Terri about how Mysterio claims that he had ruined him on the Brooklyn Bridge. She searches for incidents involving Spider-Man on the bridge, and find information about a helicopter crash, which Spider-Man remembers. He recites a film crew shooting a movie on the bridge, but one special effect was too powerful and caused a helicopter to crash. He had then saved the pilot and spotted a mortar nearby, for which the team had not been given a permit. He then webbed up one of the special effects men, Quentin Beck, who had vowed revenge on the wallcrawler for getting him caught. They find out Beck's address is "Wonder Studios" and conclude that he is Mysterio. Spider-Man sends a fax message to Jameson saying to meet him at Wonder Studios to find out the truth about Spider-Man and Mysterio.

At Wonder Studios, Spider-Man finds Beck's equipment which he had used to frame him, including suction cups which allowed the fake Spider-Man suit to stick to walls, detailed plans of the museum, mall and bridge scenes, and holocubes which created an illusion of the museum roof caving in. 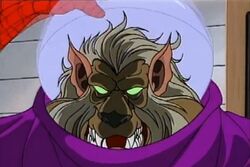 He then finds Mysterio in a room on his computer, but as he lifts up his fishbowl helmet he is greeted by an illusion of a werewolf. The real Mysterio is hiding and tells Spider-Man that not all of his tricks are fake; some of it is real and he must find out which. He has Spider-Man spun round on a mechanical disc. 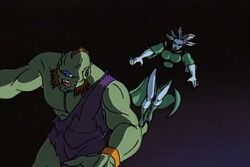 As Terri Lee and Jameson enter the building, Spider-Man is confronted by an array of Mysterio's illusions, but he simply proves them all as fakes. However, he then falls into a spider web, getting stuck. Mysterio then presents to Spider-Man a webbed up Terri and Jonah, and prepares to have them dropped on a spiked surface, but Spider-Man promply escapes from the web and saves them just in time. 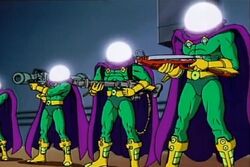 Mysterio suddenly duplicates himself and confronts Spider-Man, who uses his Spider-Sense to figure out which is the real Mysterio, defeating him.

Peter and Mary Jane later make up, and they apologize to each other. She tells him how she passed her Physics test thanks to his revision tips. Peter then thanks his Uncle Ben's memory for helping him get through the recent dilemma, before webbing off.

"Never could understand why so many people thought Spider-Man was a hero."

"I cover Spider-Man whenever, wherever."

"I guarantee you I'll catch Spider-Man but I want all you big shot media people there to record it."

"I'll never understand why everybody thinks they can be a superhero. Just a cheap imitation can't compare to my own winsome charm."

"What's next? Peasants with torches."

"Sorry. In my league it's one strike and your out."

"That does it. My life's been a mess since the day I put you on. Why did I ever do it anyway? I can't even keep a date because of you. Time to turn my life around. Hello world, goodbye Spider-Man"

"Look. I don't talk this around down at the station but I've spent a lot of time trying to figure out who he is or what side he's on. I don't know all the answers but I do known one thing. He never turned his back when he could help, which is just what you're doing now. All those times you were taking pictures of him, Parker. Too bad, too bad none of his character rubbed off."

"She's right. Spidey never did turn his back when he was needed. Except once."

"I had the power and I didn't use it. I lost my uncle because I ignored my responsibilities. He always use to tell me with great power comes great responsibility. If I stop being Spider-Man, who else will suffer?"

"There are a lot of brains in that sick fishbowl."

"Uh, next time I'll stick to the pony rides."

"Well that's Hollywood for ya. Gruff exterior but underneath it all a heart of aluminum."

"A riddle, Mr. Parker. What do I have in common with Spider-Man."
"You both look good in skin tight outfits?"

"But you know, physics is a lot like theater. I get it now. It's all about making sense out of life. Once I realized that it was easy."
"Ya, I get it now too. Thanks for helping me make sense out of my life, Uncle Ben. Spider-Man's life too."

Comic Book Resources ranked this as the fourteenth top episode of the series. They noted how the episode showed how Spider-Man is dedicated to fighting for good even when everyone is against him. They pointed to scenes showing Jameson, Aunt May, and the people of New York turning against him but he kept fighting because it was the right thing to do.[1]