Not to be confused with the similarly named episode "The Man in the Ant Hill".

On a scientific expedition to Africa, Doctor Henry Pym is attacked by Ulysses Klaw and his band of mercenaries. They want a rare mineral that Pym, under the guidance of S.H.I.E.L.D., is researching. But this lowly scientist has a small trick up his sleeve. 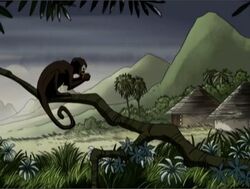 In Africa, a flock of birds fly away and a monkey eats fruit in a tree near a small village. A group of Jeeps drive through the jungle. In one Jeep, two mercenaries discuss their plans, one of them holding a gun.

One man asks another why they are going after their target. The other explains that he's a scientist doing something. When the first man presses on the second says that their boss wants what the scientist has, which is the property of S.H.I.E.L.D. 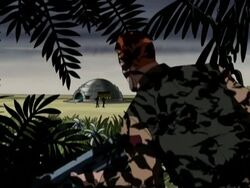 Elsewhere, S.H.I.E.L.D. soldiers guard a metallic building on a beach. As two of the soldiers patrol the perimeter, the mercenaries from the Jeep sneak around in the nearby jungle. They make their way near to the transport where two more men patrol.

One of the men hiding levels a gun at the ship. As a soldier passes by, another man points his gun out of the tall grass. Two more men ready their guns in the jungle. Silent shots go off and the patrolling soldiers all drop. The men come out of the jungle and approach the building.

Inside, Dr. Henry Pym holds up a voice recorder and begins his journal. An red ant crawls by behind him carrying a large leaf. Henry says that S.H.I.E.L.D. found a sample of the rare metal Vibranium outside the nation of Wakanda. 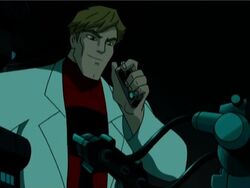 He walks over and lifts up a small cloth to reveal the sample. He is excited because no other scientist has ever examined the material before. He goes on to say that S.H.I.E.L.D. director Nick Fury asked him to make sure it was safe to be handled my humans. He then leans over to examine it through a microscope.

He looks down and tells his ants that he's making sure it's safe for them too. The ant merely looks up at him. Henry goes on to say that he wants to test the vibrational properties that Vibranium is reported to have. 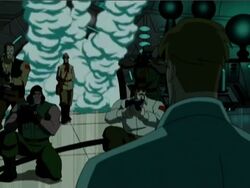 Just then an explosion blasts the doors forward destroying the monitor. Unharmed, Henry calmly turns towards the smoke. Four armed men run in and point their guns at Henry. They are followed by a fifth man who simply strolls in.

Henry states that the door was already opening and blowing it apart was unnecessary. The fifth man introduces himself as Ulysses Klaw and says he wants to talk about the Vibranium. Henry suggests talking with Janet Van Dyne first. 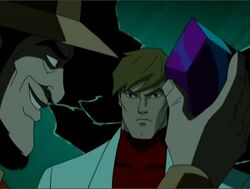 Klaw strolls forward and states that he's going to take the metal and all of Henry's research. He reaches around Henry to grab the Vibranium. Henry coldly says that he won't let that happen. He says that there's a lot science can learn from it. But Klaw says he already knows of a use for it. 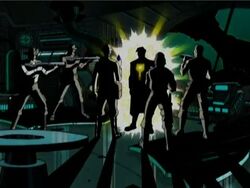 Klaw then calls out to his men and they raise their guns at Henry. Henry sighs saying how no one wants to discuss things anymore. He reaches for his belt and activates a button. Yellow liquid fills the black on his jump suit and causes a bright light.

As soon as the light dissipates, the men begin shooting into an empty lab coat. The coat gets filled with tranquilizer darts and falls to the ground. One of the men walks over and probes the jacket with his gun. 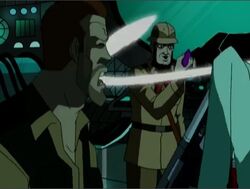 He wonders where Henry went and what happened. Klaw walks up saying it doesn't matter since he has the sample. Just then a small beam of light hits the man in the face knocking him back. Klaw looks shocked and the other three immediately begin searching the room with raised weapons.

One man begins sweating as he steps on the broken pieces of the monitor. Another man's trigger finger begins to shake. The fallen man begins to drool into a puddle. Klaw looks down and opens his bag revealing a mechanical device. 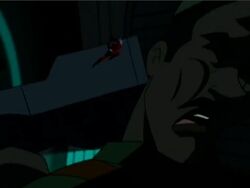 Suddenly one of the men is knocked back. Almost unnoticeable, Henry has shrunk down to the size of an ant and is wearing an helmet, as the superhero Ant-Man. He had punched the man with incredible strength and lands on his fallen body.

The other men look around in shock not knowing what happened. The remaining two begin firing their shotguns wildly into the room destroying much of the equipment. 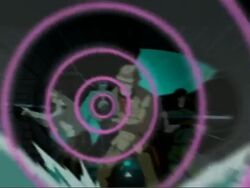 Klaw calmly holds up the piece of Vibranium. He opens a compartment on his device and puts the metal in. He then holds up his own gun-looking device. He bids farewell to Henry, wherever he is, and blasts the room with a strong sonic blast. 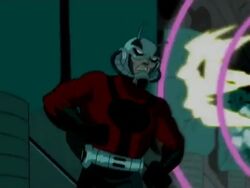 In his tiny state, Ant-Man runs from the sonic blast and leaps onto Klaw's arm. However, he gets caught in the blast and knocked back against a wall. Henry struggles to get down and crawls his way to a button. 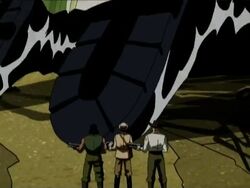 Henry presses it causing a large blast of light. Soon the whole building is engulfed in the light. After it stops, Klaw commands his men to leave. They exit but are shocked to see the fight boots of a S.H.I.E.L.D. soldier. They realize that they and the entire building have shrunken down. Klaw looks down to see the enlarged sand. 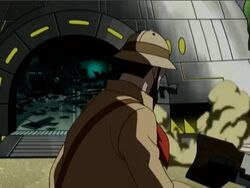 One of the men asks Klaw about what is happening. They hear a rustling and raise their weapons. The men look to Klaw when one of them is suddenly jerked into the grass. As Klaw looks around he sees the other man also pulled away. 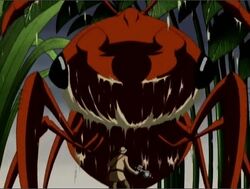 Klaw doesn't believe this is real when a red ant forces its way up through the dirt. Two more immediately walk up and surround him. Ant-Man then appears behind Klaw on a flying ant. He welcomes Klaw to his world and asks if he's ready to talk. 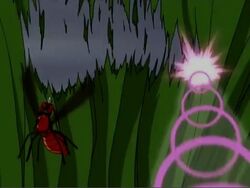 Klaw glares and fires his weapon. The flying ant dodges causing Klaw to cut the grass. Ant-Man leaps off the ant and towards Klaw. He punches the thief right in the mouth and leaps over his body. 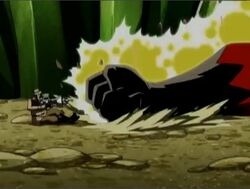 Klaw gets up and runs towards Ant-Man. He throws a punch but the scientist blocks and throws his own. Klaw flies back and lands near his gun. He readies it but Ant-Man presses his belt button again. Klaw fires but Ant-Man begins to grow in size. Ant-Man then throws a punch knocking Klaw back. 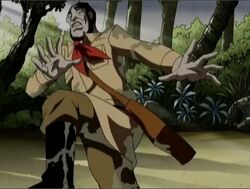 Klaw flies back and grows to his normal size, his gun falling behind Ant-Man. Klaw gets up and runs away scared. Ant-Man smiles and picks up the gun. He examines it then smiles again. 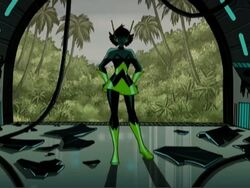 Outside the resized building, two more S.H.I.E.L.D. soldiers run to the fallen man and check him. One points to the opening. Just then the tiny Wasp enters looking for Henry using the nickname Hank. She looks around at the damage then sees Hank looking calm at his workstation. 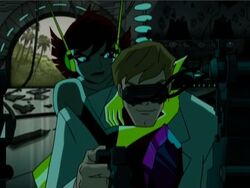 Realizing he's fine she lands and grows to normal human size. She walks over and hugs him from behind. Hank then asks Janet if she can make sure the shrunken mercenaries don't get eaten by the ants. She looks up in shock at the thought.

"So who is this guy?"
"Some egghead scientist doing some kind of experiment or something in the jungle. He's a nobody."
"Why are we here?"
"Cause the boss wants what this guy's got. And what he's got is the property of S.H.I.E.L.D."

"Field Journal 011962-27. Dr. Henry Pym recording. S.H.I.E.L.D. found a sample of the rare metal known as Vibranium outside the African nation of Wakanda. Which is pretty exciting, frankly, cause I'm the first scientist to ever examine the metal. S.H.I.E.L.D. director Nick Fury asked me to evaluate it and make sure it's safe to be handled by humans. Don't worry, I'm sure he meant safe for all life. Anyway, I'm going to test the metal's reportedly unique vibrational properties. Supposedly..."

"You know that door didn't have a lock on it. You could've just opened it."

"Doctor Pym, I presume. My name is Ulysses Klaw. I'd like to have a word with you regarding the Vibranium sample you're working with."
"You should make an appointment then. Contact Janet Van Dyne and we'll all have lunch."
"You misunderstand. I want all your research. Then I'll be taking the metal."
"I'm afraid I can't let that happen."

"[Sigh] No one wants to talk things out anymore. Disappointing. Well, we'll do things the hard way then."

"Good bye, Doctor Pym. Wherever you are."

"Welcome to my world, Klaw."

"Hank! Are you... Oh. Well I guess you are okay. Never mind."
"Jan, I'm fine. Oh, but I do need a favor. There's a couple of mercenaries out on the beach, I shrank them down. Can you just make sure the ants don't eat them. Thanks."
"Eat them! Ew." 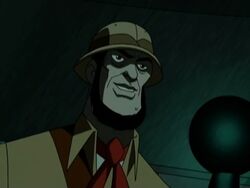 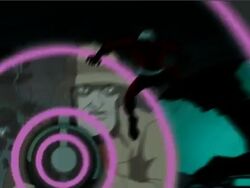 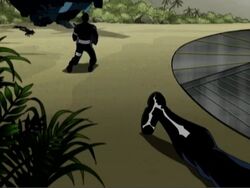 This episode along with the other micro-episodes "Enter the Whirlwind", "Welcome to Wakanda", and "The Big House" combined to become the season one episode "The Man in the Ant Hill".

Retrieved from "https://marvelanimated.fandom.com/wiki/Episode:The_Man_in_the_Ant_Hill_(Micro-Episode)?oldid=60110"
Community content is available under CC-BY-SA unless otherwise noted.