Not to be confused with the similarly named episode "Iron Man is Born".

The fears of Tony Stark's closest friends are justified when Iron Man has to defeat HYDRA. (Series Premiere)

In California, a man with a camcorder walks along a pier videotaping the other people. He checks out a cute girl passing by but his friend thinks he is embarrassing himself. He turns the camera to look back at the beach.

Suddenly a energy beam strikes the beach. The camera pans by and sees a man looking up at the ferris wheel, which gets blasted. The camera man runs to the end of the pier and is splashed by a wave of water caused by the beam.

The man's friend suggests leaving immediately. Meanwhile the robot and object continue their fight. A large blast consumes the robot but it shakes the smoke away. It then catches the smaller object in its hands and drops it.

The robot then starts walking towards the pier. Then it is caught in an electrical field. It tries to fight the electricity but then blows up. The camera man looks up to see a large piece coming straight at him. He and the other people still watching quickly turn and run.

He sees one piece crash into the water next to the pier. He turns to see more debris strike another pier. He then looks up to see another piece heading right towards him. He tries to run but trips and falls over.

He looks up to see people running by and the debris almost on top of him. Just then Iron Man flies in and catches the debris. He boosts his boot jets and lifts the debris away.

A reporter then explains that the footage was taken earlier that day. She goes on to say that Iron Man saved the city.

In their car, James Rhodes turns off the news report. Rhodey wishes Tony had told him. Tony Stark, driving, brags that the robot was actually much bigger. He then races his red sports car down the freeway.

Rhodey feels that Tony should let S.H.I.E.L.D. handle things like oversized robots he should help them. Tony points out that he got out of the weapons making business and is going for a better image. But Rhodey doesn't like that he's fighting supervillains. Tony then speeds up and races around a semi truck.

Rhodey then suggests that he help out the Hulkbusters take down the Hulk. But Tony ignores him, claiming the robot was more fun, and speeds away to Stark Tower in the distance.

Inside the garage Pepper Potts waits for the two men to arrive. She blows some hair out of her face then checks her watch. Just then Tony's car pulls into the garage and the two get out.

Tony jokingly tells Pepper that although she's a great assistant she doesn't need to park the car, and reminds her that they have valets. Pepper tells him that he should answer his phone, especially since he makes a living off technology. Tony asks if it was because she missed him. Pepper tells him that HYDRA just attacked the United Nations.

The three watch news footage of a large octopus-shaped robot leaving the East River. It walks onto shore and the bottom opens up releasing a squadron of HYDRA soldiers. As they leave down the lines they fire their guns towards the ground.

Tony asks where S.H.I.E.L.D. is and Pepper states they are forty minutes away. She then explains that while the UN has a military detail there, they are in full assembly with every world leader, including the President of the United States of America, attending.

Tony then turns to leave. Rhodey asks him where he is going. Tony simply states that Pepper should reschedule his lunch meeting.

The Mark VI rises out of the floor allowing Tony to step in. Tony steps into the boots and the suit builds itself around his legs. It then attaches itself to his arms. The chest assembles itself then the helmet is put on. Iron Man's eyes begin to glow.

Outside Stark Tower Iron Man flies up and away. As Iron Man flies through the skies Rhodey radios in telling him to be careful. Iron Man says he won't start now and feels it will only take him ten to fifteen minutes to deal with the situation.

Back at the UN, the military tries their best to stop HYDRA but is unable to do anything. The robot walks around the building and slams one of its tentacles into the side. It readies a large weapon at the armored vehicles that the detail is using as cover.

Just then a power beam strikes the large robot in it's skull-shaped head. It looks up to see Iron Man firing it from his chest. He stops and the robot crashes backwards into the river.

Iron Man then asks JARVIS for an update. JARVIS tells him that the suit is down to forty percent because of using the unibeam. Iron Man then asks about the soldiers on the ground. JARIVS scans the ground and concludes that there are fourteen heavily armed HYDRA soldiers.

Iron Man then uses his external speakers to tell them that after many years of trying that HYDRA probably won't actually take over the world. One of the soldiers readies a rocket launcher and fires at Iron Man. He easily dodges the attack as they all start firing at him. He then decides to do it the hard way.

Iron Man flies forward and fires an arm mounted rocket. The rocket splits apart as Iron Man flies up. Each individual projectile then attaches itself to a HYDRA gun and explodes knocking out several of the soldiers.

More hide behind a vehicle and watch the action. Just then the vehicle is lifted up by Iron Man. He holds it with one hand and fires his repulsor beam with the other.

With all the soldiers knocked out Iron Man throws the car to the side and comments on how easy it was. Just then three projectiles launch themselves from the fallen HYDRA robot. Iron Man braces himself as three large spheres crash besides him. As the dust clears Iron Man asks JARVIS for an update. He explains that the suit is down to thirty-two percent power and suggests recharging.

However, three large robots stand up and surround Iron Man. The eyes of one begins to glow, another opens its mouth revealing fire inside, and the third raises and activates a large drill on its arm. The three recognize Iron Man and find that their objective is to destroy it.

"Checking out the beautiful scenery. Well hello."
"Come on man, you're embarrassing yourself."
"Dude, would you relax?"

-Camera man and his friend, first lines of the season

"Iron Man. That incredible footage coming in from California as Iron Man saved the city from what witnesses called..."
"A giant robot. Really? You could've told me."
"I don't like to brag but that footage didn't capture how big the thing really was. I mean huge."

"Look, that just makes my point for me. S.H.I.E.L.D. should be fighting giant robots, not you. They're not the bad guys, Tony, and they need your help."
"I'm out of the weapons making game, Rhodey. You're looking at a kinder, gentler Tony Stark."
"That fights supervillains."

"We've been over this a million times. You're starting to bum me out."
"What about the Hulkbuster unit? Even if you won't build weapons for S.H.I.E.L.D. you can still help them take down that monster."
"I am not listening to Rhodey anymore. La la la. I still can't believe this is what you wanted to meet about. The giant robot was more fun than you."

"Pepper. I already know you're a great assistant, okay. You don't have to park my car too. We got valets for that."
"For someone that makes their living off of technology you should try answering your phone. I've been calling for the last twenty minutes."
"Ah, because you miss me so much?"
"Because HYDRA just attacked the United Nations."

"This is happening right now? Where's S.H.I.E.L.D.?"
"Forty minutes out. There's a military detail at the UN, but Tony, it's a full assembly. Every world leader is attending. Including the President."

"Hey! Where are you going?"
"Pepper, reschedule my lunch meeting. I'm gonna be a few minutes late."

"Be careful, man."
"Why would I start now? I'll ten minutes, fifteen minutes max. Trust me."

"Whatta we got, JARVIS?"
"Armor power is down to 40% after using the unibeam, which I recommended against."
"I meant on the ground."
"Ah yes. Fourteen HYDRA targets. All heavily armed, sir."
"Hmm. Maybe I should've brought Rhodey along."

This micro-episode along with "HYDRA Lives!", "Behold, the Mandroids!", and "Nick Fury, Agent of S.H.I.E.L.D." are to be combined into the full length episode "Iron Man is Born", which would air October 24, 2010.

The episode contains several references to the two live action Iron Man films. Most notably that JARVIS is an artificial intelligence as in the films rather than the butler as in the comics and other media. Given the references throughout the series, it would most likely take place after the second Iron Man film, much in the same way that Spider-Man: The New Animated Series followed the first Spider-Man film. 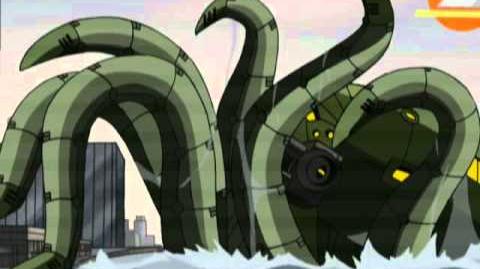 Retrieved from "https://marvelanimated.fandom.com/wiki/Episode:Iron_Man_is_Born!?oldid=86816"
Community content is available under CC-BY-SA unless otherwise noted.