Not to be confused with the similarly named episode "Hulk Versus the World".

Hulk finds himself with plenty to smash when he faces off against the Absorbing Man, the Hulkbusters, and S.H.I.E.L.D.

Continuing from the last episode... 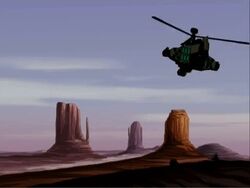 Two helicopters fly through the desert. HB-1 contacts Hulkbusters command. The pilot reports that the target is in Monument Valley and they are in route.

The two copters fly off through the buttes as they hear the Hulk roaring in the distance. 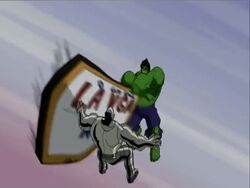 Elsewhere, Hulk and Absorbing Man are flying through the air hurtling towards the ground. Hulk has the "Welcome to Las Vegas" sign in his hands and is bashing Absorbing Man.

Absorbing Man, still in his metal form from the spoon easily recovers from the hits. He then punches Hulk repeatedly in the stomach then in the chin.

Hulk lets go of the sign and grabs Absorbing Man. The two men fall with the sign above them. 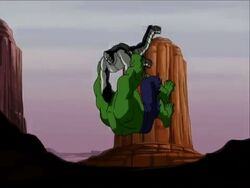 Absorbing Man gets the upper hand and pushes Hulk below him. The two crash in the desert between three large buttes.

As the dust clears Absorbing Man, in his human Carl Creel form, emerges from the hole. He absorbs the desert dirt but finds it too loose. He then grabs the nearby sign to become metal again. 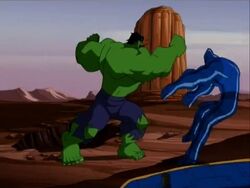 Hulk stands behinds him and growls. He punches Absorbing Man away from the sign. Absorbing Man comes to a stop with a large fist dent in his chest.

He laughs as he fixes himself. He tells Hulk that everything the inmates of the Cube said of him was true, that Hulk had gone soft.

He forms his hands into hammers and approaches Hulk. As Hulk nears he bashes the green giant's head. He repeatedly bashes Hulk and even smashes his head between his two hammer-hands.

Absorbing Man brings both his fists up knocking Hulk back. Absorbing Man then notes that Hulk has "gone soft" and isn't fighting as hard as he used to. 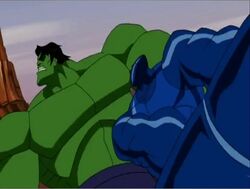 He wonders if Hulk wants to be a superhero, but claims that people fear him more than they do Absorbing Man. He punches Hulk knocking him back.

Absorbing Man tries to throw another punch but Hulk catches it with one hand. Hulk begins crushing the hammer-hand then headbutts his face in knocking him away. 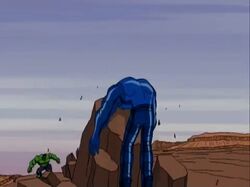 As Absorbing Man comes back down, Hulk leaps up and punches him away. The villain crashes into the side of a butte. 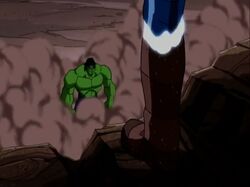 He crashes to the ground and Hulk leaps over to him. As the dust clears Absorbing Man absorbs the rock from the butte.

He taunts Hulk saying that he can become anything, including rock. Hulk smiles and smashes Absorbing Man's arm into dust, claiming that he can smash rock.

Absorbing Man panics and backs up trying to calm Hulk down. Hulk grabs Absorbing Man by the head and smashes him into the ground.

Absorbing Man claims that Hulk couldn't do this. Hulk leans over and says he can. 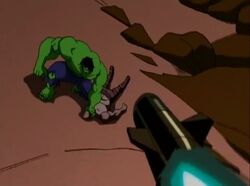 Just then Hulk looks up to see a missile heading towards him. Hulk looks surprised as the missile hits Hulk causing a large explosion.

Hulk is thrown back and crashes into a rock. Absorbing Man's dismembered head lands nearby. Hulk looks up and, seeing the Hulkbusters, knows that General Thaddeus Ross is behind the attack. 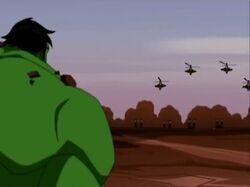 Hulk spots helicopters and Hulkbuster Tanks making their way across the desert towards him. The Hulkbuster Mobile Command brings up the rear.

Inside the command center, Ross approaches two technicians. He orders all of the Hulkbuster units to open fire. The tanks all fire at Hulk.

One of the shells misses Hulk and he is able to punch two more out of the air. But two more follow and hits him. He leaps up as another comes streaming towards him.

A helicopter tracks him and fires four missiles. Three miss but one knocks him out of the air. 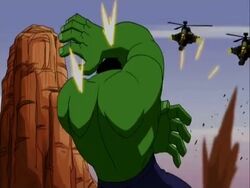 He bounces before finally crashing to the ground. Getting angry, he looks up to see the helicopter circling him. It then opens fire with its two Miniguns.

Though the bullets just bounce off him, Hulk can only stand and shield his face from the barrage of bullets. Another helicopter circles around and opens fire.

HB-1 stops firing as the dust clears. Hulk leaps out and grabs the canopy breaking the glass. The helicopter begins circling wildly.

Hulk tears off a missile launcher from under the canopy and falls to the ground. Hulk stands and levels the launcher at the oncoming tanks. 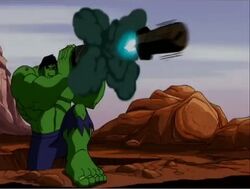 Hulk is able to fire the launcher. Two of the tanks are destroying after being hit by a single missile each.

Another helicopter circles around and fires on Hulk. Hulk throws the launcher at it destroying the helicopter. The vehicle crashes in a spectacular fireball as the pilot parachutes down to safety.

In the command center, Ross orders his men to keep firing, lest the green giant gets away. Suddenly, a Russian woman comes onto the radio ordering him to withdraw his men.

Since it is a secure channel, Ross demands to know who the person is. The woman only identifies herself as his superior and restates that he should back off. 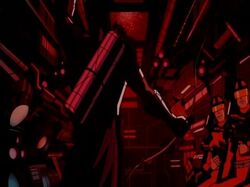 Overhead in a S.H.I.E.L.D. jet, the woman cuts off the transmission. The interior is filled with heavily armed soldiers and a man with a bow. The pilot's voice comes on the speaker saying that they have two minutes until the reach the target. The man pulls out his bow and unfolds it.

In the desert, a tank rolls backwards as it fires on Hulk. He leaps down smashing the vehicle. The driver scrambles out as Hulk tears the top off and throws it into another tank. 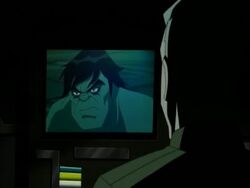 In the command center, Ross zooms in on Hulk's face. The giant turns and tells Ross that he hasn't forgotten about him.

As Hulk turns and walks towards the command center, the jet arrives and begins hovering over Hulk.

An arrow lands in front of Hulk pulling a cord. Hulk looks at it in confusion. Two more arrows then land and stick to his chest. 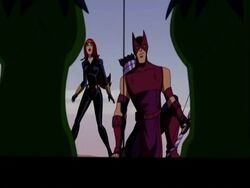 The man, Hawkeye, swings down the cord using his bow. He is followed by Black Widow who lands just after him. The two look up at Hulk.

Hawkeye says, "Tick, tick, boom." Hulk looks down as the two arrows blow up. The two S.H.I.E.L.D. agents look up at the cloud of smoke.

"HB-1 to Command, target is in sight. He's touching down in Monument Valley. We are in route."

"Everything they said about you in the Cube is true. You've gone soft."

"Is that it? Are you trying to be some kind of hero? Is that why you took us out here? To protect people? Well, I've got news for you Hulk. Those people you're protecting, they think you're more of a monster than me!"

"Idiot monster, I can absorb anything. Even rock."
"Hulk smash rock, Einstein."

"KEEP FIRING! DON'T LET HIM GET AWAY!"
"General Ross, withdraw your men. Now."
"This is a secure channel. Who is this?"
"Your superior, tovarisch. Now, back off."

"Don't think I forgot about you." 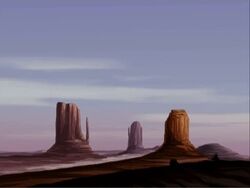 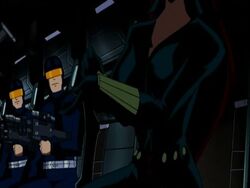 This episode along with the other micro-episodes "The Coming of the Hulk", "This Monster, This Hero", and "Beware the Widow's Bite" combined to become the season one episode "Hulk Versus the World".

Retrieved from "https://marvelanimated.fandom.com/wiki/Episode:Hulk_Versus_the_World_(Micro-Episode)?oldid=47800"
Community content is available under CC-BY-SA unless otherwise noted.