Little is known about the history of Elizabeth.

At some point she ascended to the throne to become Queen. She had a son named Charles who then married a beautiful woman named Diana.

At some point she, Charles, and Diana went to the United States of America visiting New York City. While there they stayed at Trump Plaza. They rode in a limousine to the hotel. For some reason she decided to wear the crown jewels for the journey.

Upon their arrival they were swarmed by photographers taking pictures with their cameras. Also in the crowd was who they thought was Sue Storm-Richards. 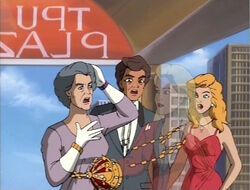 The three stood at the entrance taking pictures when Sue suddenly became invisible. Suddenly the crown was taken off Elizabeth's head shocking the crowd.

A reporter cried out that Sue was a crook.

United States President Bill Clinton later ordered that the Fantastic Four be brought in after all the members were seen committing crimes. The superheroes were later able to prove that the ones who committed the crimes, including stealing the crown, were alien shapeshifters called Skrulls.

It is unknown what happened to her afterwards or if she ever got the crown back.

Elizabeth was unnamed and unvoiced. She was simply called the Queen.

She is based on the real figure.

Retrieved from "https://marvelanimated.fandom.com/wiki/Elizabeth_II?oldid=58608"
Community content is available under CC-BY-SA unless otherwise noted.