Electro is a villain from the Non MAU The Spectacular Spider-Man series.

Electro is the adopted moniker of Maxwell Dillon, a former electrician who fell victim of a lab accident that turned him into an electricity-based supervillain and member of the Sinister Six.

During one night, Max precariously places his drill on top of a machine he was working on. While struggling to dismantle a piece, he knocks the power tool into the electric panel, and when he grabs it he receives an electric discharge that hurls him back against the eel tank. The tank cracks and Max is bathed in its special fluid.

He is rushed to the hospital by Dr. Connors and Eddie Brock. Max arrives there strapped to a gurney, crackling with electricity and is taken to the isolation ward.

Max's body begins to generate a constant stream of bio-electricity, which can only be contained by an isolation suit. He is assured this is only temporary and that Connors will start working on a cure. Max snaps back saying that it is least he could do, blaming Connors for the mishap.

Max grows increasingly impatient and frustrated with his condition, as his bio-electricity doesn't even allow him to watch television. He also mourns over his life plans that now had come to naught. When Brock suggests that he simply needs to take time to adjust to his condition, Max lashes out, causing every electric machine in the building he's in to short out. He then storms out of the hospital.

Later on, he goes into the Silver Spoon Café to buy a cup of coffee. There he becomes dismayed by the frightened look of everyone's eyes, and when he realizes he cannot even sip his drink, Max becomes furious. His powers flare out of control, causing a blackout. As he dashes away, he is spotted by Peter Parker, who was in the vicinity.

Thinking him to be a robber, Spider-Man intercepts Max and inadvertently pulls off his protective suit's mask. Max, enraged, asks Spider-Man why he attacked him and unwittingly shoots a beam of electricity at him. Realizing he can channel and direct his bio-electricity, Max vents his rage on Spider-Man who stays one step ahead of his jolts. Spider-Man taunts Max and calls him "Electro." After hurling several arcing bolts of electricity at Spider-Man, Max takes a window of opportunity to flee.

On the following night, Max is heading back home when he is approached by Dr. Bromwell and two police officers, who want to bring him back to the hospital. Max rejects any help, and when the police threaten him with jail, Max has an outburst. He states that Dr. Bromwell can't help him, but he knows who can, and heads off to the ESU lab.

At the lab, he bursts in and calls out for Connors. Finding Peter, Gwen Stacy, Liz Allen and Eddie Brock he demands them to tell him where Connors is. Connors emerges from his office where he tries to get Max to calm down. Max however is beyond calm and, blaming the scientist for the accident, demands a cure. Connors pleads with him, saying that it will take time, but Max is impatient and starts pressing in. Brock tells Peter to get the girls out the back as he distracts Max. Brock lunges at Max, who electrocutes him, knocking him aside. Peter and the girls go out the back and tells them to go into a nearby shop, then as they do so, he turns back and changes to Spider-man.

As Max closes in on Connors, Spider-Man arrives and steps in, offering Max his help. However, Max is unconvinced and shocks him. He goes on to proclaim himself "Electro," the moniker Spider-Man had used earlier to taunt him, and unleashes a barrage of electricity, inadvertently charging Dr. Connor's vial of lizard DNA.

Spider-Man takes him on, giving Dr. Connors, Martha and Brock a chance to escape. Electro vents his rage on Spider-Man for losing his only chance for a cure and the fight pursues outside. In the mêlée, Spider-Man spots a pool and plunges Electro inside, short-circuiting him into unconsciousness. ("Interactions")

Electro is presumably taken into custody and moved to Ravencroft, where for the next months he undergoes psychiatric rehabilitation under Dr. Kafka.

During his tenure, he receives letters from Doctor Octopus proposing the idea of teaming up against Spider-Man. Electro pretends redemption for Dr. Kafka, and as soon as he is released, he contacts Octopus letting him know he is out.

Later that night, Electro breaks into Ryker's Island and takes the power out, thus releasing Sandman and Rhino from their specially tailored confinements. Electro waits outside until the all the villains (also including the Enforcers and the Vulture) break out. Doctor Octopus commends Max for his work, but he claims to prefer to be called "Electro" and activates Doc Ock's arms.

On the next day, Rhino goes on a rampage in Times Square, calling Spider-Man's attention. When he shows up donning the black suit, the rallied super villains make an entrance and attack the webslinger. When Spider-Man realizes they are too much to handle, he retreats into the sewer. Electro, Doctor Octopus, Sandman, and Shocker go after him. Electro apparently had learned to conduct his electricity safely through water and attempts to illuminate in the dark tunnel. However, while Doctor Octopus commends him for his ability, he asks him to go back up so as not to endanger the group. Electro protests, but Doctor Octopus frowns calling him Maxwell, so he sorrowfully complies.

After the search comes to naught, the Sinister Six go into a restaurant and toast to Spider-Man's defeat. But everyone starts quarreling over their personal interests, until Electro stands up, claiming he still wants a cure but they must trust Doctor Octopus so that everyone can get what they want.

Then, so as to lure Spider-Man, the Sinister Six take hostages in a bank near Central Park. The plan succeeds and Spider-Man- who, unknown to the sleeping Peter Parker is being controlled by the Symbiote -arrives only to be ambushed and quickly subdued. In the ensuing mêlée, Shocker and Electro shoot a combined blast at Spider-Man, but Rhino gets in its trajectory and is knocked out and immobilized. Shocker keeps shooting while Electro tries to sneak behind Spider-Man, who hurls Rhino at him, pinning Electro down to the ground. Unable to slip out, Electro's powers flare out of control when Doctor Octopus attempts to impale Spider-Man in Rhino's horn.

After the Six have been defeated, the police take them into custody. ("Group Therapy")

Electro is taken back to Ravencroft to resume therapy. But unlike last time, Electro doesn't pretend contrition. He keeps rebuffing his old identity and asserts himself as Electro all the time. He also becomes dismayed by Doctor Octopus apparent redemption, unaware that his old mentor was secretly building an empire under the alias of the Master Planner.

When Kraven the Hunter breaks in to extricate them both, Electro convinces him to leave Octopus behind. He joins the Master Planner's new Sinister Six to make another attempt to kill Spider-Man.

The Master Planner employs a new strategy this time: teaming the villains in pairs so as to wear Spider-Man down.

Electro is paired with the Vulture and the two lure and attack Spider-Man in an ice-skating pond. When Spider-Man ensnares the Vulture in the giant Christmas Tree, Electro shoots at Spider-Man, setting the tree ablaze. Electro goes after Spider-Man into a tire barn where the webslinger starts hurling tires at him. Electro wards them off with his electricity, not noticing that he has melted several tires, gluing himself to the floor. Spider-Man covers Electro with tires head to toes, trapping him in a non-conductive rubber coating.

The Tinkerer eventually extracts him at the behest of the Master Planner. ("Reinforcement")

Electro later finds out that the Master Planner is Doctor Octopus, who explains to him why he put up that façade. Afterwards, Electro helps the Tinkerer calibrating the machine he assembled for Doc Ock. The next stage of the plan involved kidnapping Gwen Stacy to hold her for ransom. 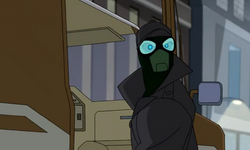 After tracking her down, Doctor Octopus provides a distraction and Electro creeps behind Gwen. He stuns her unconscious, and the Vulture takes her away, however, they are spotted by Spider-Man who takes off in hot pursuit. Before the Tinkerer can employ any evasion tactic, Electro starts hurling jolts at the webslinger. Spider-Man eludes every hit and manages to make their escape van overturn, skidding to a halt.

Electro escapes and heads back to the HQ. When Spider-Man sneaks in, he is detected by Doc Ock via a security camera, and Electro goes after Spidey. A fight ensues, and Spider-Man taunts Electro into damaging the equipment that granted the Master Planner access to every computer in the city. Accidentally, he also tears the walls down and gets knocked out by a falling girder. After Doctor Octopus retreats and activates the self-destruction device, Electro is still unconscious and is hauled to an escape pod by Spider-Man. Electro is then returned to his incarceration. ("Shear Strength")

Electro is seen in an insulated ward in Ravencroft, where he is lamenting over his old identity and insisting on his name being Electro rather than Max. A doctor asks Connors whether he is "another one of your's" and Connors regretfully nods. ("Growing Pains")

Electro can generate massive quantities of electricity. He can employ this electrostatic energy as lightning arcs from his fingertips, and his maximum charge is more than enough to kill a normal human. He can charge himself up to make himself more powerful. He can also absorb the energy of electrical equipment such as a power plant to increase his powers further.

When he is fully charged, Electro is extremely sensitive to anything that may "short circuit" him, such as water.

Electro is voiced by Crispin Freeman.

This version of Electro is a combination of the main Marvel Comics universe and the Ultimate Marvel version. Like the 616 version, he was a normal man who got his powers through an electrical freak accident. But those powers are more in line with the Ultimate version. His face is designed to be similar to 616's version.

Retrieved from "https://marvelanimated.fandom.com/wiki/Electro_(The_Spectacular_Spider-Man)?oldid=86781"
Community content is available under CC-BY-SA unless otherwise noted.