Ego is an enormous being who can disguise himself as a planet. 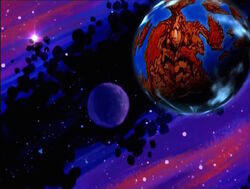 At some point, Ego met the planet eater Galactus. The two battled but were too evenly matched. To prevent the planet-being from becoming a threat, Galactus attached enormous rockets to him to send him across the galaxy. 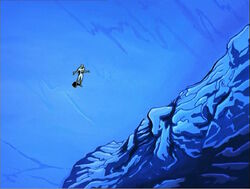 Ego was used by the power-hungry Thanos to discover the secrets of Galactus. They lured Silver Surfer there and Ego entered his mind with Thanos. However, Thanos was shocked by the memories of Zenn-La and left. Ego thanked Surfer for freeing him from Thanos' control and vowed to help him someday.

When Surfer was free of Galactus, Ego found the former herald and formed himself into a copy of Zenn-La. He knew the Surfer was searching endlessly for his home planet and Ego felt he could be a surrogate home. However, Surfer found out about this and confronted Ego. The two parted ways.

Some time later, Ego became bitter and harsh. He made his way towards Earth intending to destroy it as they had apparently become allies with Galactus. He fought with Thor but defeated the Asgardian God. The Fantastic Four saved Thor and landed on Ego. Mister Fantastic and Thor went to find Galactus while Human Torch, Thing, and Invisible Woman tried to slow Ego down. They eventually found a power pack and dropped it in Ego's core while he fought Galactus. The energies were too much for him and he was destroyed.

Ego was voiced by Kay E. Kuter on Fantastic Four and Roy Lewis on Silver Surfer.

The personalities of Ego in each series is dramatically different. In the comics, it is explained that the engines drove him mad.

Ego was once a scientist who merged with his planet when his sun went nova.

Thor was recruited to stop Ego.

When a weakened Galactus tried to consume Ego, Thor helped Ego to stop the planet eater. To pay him back, he let the Wanderers live on his surface. However, he consumed them when they tried to find a new planet.

While fighting Beta Ray Bill, he revealed that the engines Galactus put on him were driving him mad.

Thing was not successful in destroying Ego, but did cause him to end up in a star seemingly destroyed. He eventually recovered and reformed himself.

Retrieved from "https://marvelanimated.fandom.com/wiki/Ego?oldid=54164"
Community content is available under CC-BY-SA unless otherwise noted.