Drax is an android.

Drax became friends with Mentor. The two then sought a library with all knowledge of the universe. While on the way, they encountered Silver Surfer and Pip the Troll. However, those who sought the library became slug-like creatures, including Mentor and Silver Surfer. Surfer returned to normal and he, Drax, and Pip left. Pip then decided to travel with Drax.

The two were together when Thanos reversed time. 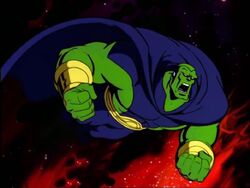 As an android, he can survive in the depths of space. He is able to fly. He is incredibly strong and durable, able to do battle with Silver Surfer.

Drax was voiced by Norm Spencer, who voiced Cyclops on X-Men.

Drax was originally Arthur Douglas, a ordinary human man who's family was killed in an attack by Thanos. He was resurrected by the entity Kronos, as a powerful alien warrior called Drax the Destoyer as the perfect enemy to Thanos.

He first appeared teamed up with Iron Man to fight Thanos.

He joined numerous other superheroes to fight Thanos who killed half the universe with the Infinity Stones.