Doctor Stephen Strange, or simply Doctor Strange, is a superhero who is a master of the mystic arts. He is often called upon to deal with supernatural villains and other mystical threats.

Little is known about the early life of Stephen Strange. At some point he became a prominent surgeon. 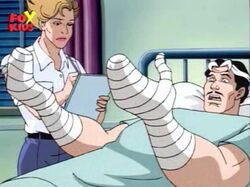 Eventually, he was involved in a car accident. He awoke in the hospital to find is hands bandaged. Stephen learned that his injured had taken away the delicate touch that was required for his line of work.

The events left him a bitter and broken man. Stephen began searching the globe for a way to help him when he came across a man known simply as The Ancient One.

Stephen wanted an instant, miracle cure. However, the Ancient One wanted Stephen to study with him and learn the mystic ways. Stephen was too bitter to listen and was going to leave. 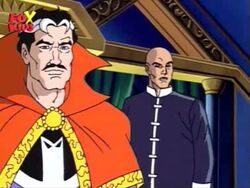 Stephen realized there was still goodness in him. He agreed to become the Ancient One's disciple in order to fight Mordo and the evil magic he stood for. Since then he has constantly prepared himself for the inevitable battle between he and Mordo.

At some point Stephen acquired his own assistant named Wong. He set his base in the Sanctum Sanctorum in New York City.

Stephen is able to sense the Phoenix Force. He first took notice when Phoenix took several X-Men into space. 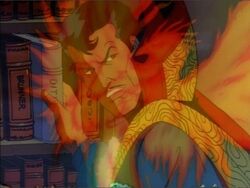 Stephen was putting away a book in his library when Jean Grey became the Dark Phoenix. He sensed it along with Thor and Uatu.

Later, he went skiing at a resort in Germany with a woman named Clea. Unnoticed by either of them, the X-Men members Logan, Remy LeBeau, and Rogue were there.

At some point, Stephen came into possession of the Wand of Watoomb, a mystical device of unknown properties. One thing it could do would allow the demon Dormammu to escape into our realm.

Baron Mordo uses a cult he formed in an attempt to steal the Wand but was stopped by Stephen along with the help of his assistant Wong and the superhero Spider-Man, who was following where flying people were going.

Spider-Man, seeing that Mary Jane Watson was with the cult, followed after them despite being warned by Stephen not to.

After fending off the attackers, Stephen finally reveals his origins to Wong.

Unbeknownst to him, Spider-Man's alter-ego joined the cult in order to find Mary Jane as well as the truth behind the cult. Unfortunately he became brainwashed and went with the cult on their next attempt to acquire the Wand. 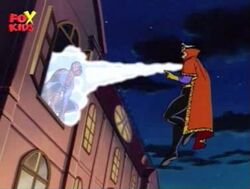 The wallcrawler overpowered the sorcerer and cult managed to take the Wand despite Wong's best efforts. Stephen removed the spell controlling Spider-Man and explained that Mordo intends to release Dormammu into our realm. He stated that if he must face the demon it would be the battle of his life.

Together with Wong and Spider-Man, Stephen went to the cult's headquarters to reacquire the Wand in order to stop Mordo and Dormammu. 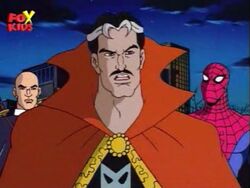 The three battled the cult and eventually Stephen got away and met Baron Mordo where the two face off in a mystical battle. Strange got the upper hand but Dormammu was able to fight Stephen through Mordo.

Unable to simply stand by and watch, Spider-Man with the Wand leaped through the portal that Mordo had opened. Stephen eventually defeated Mordo and entered the portal after Spider-Man.

Stephen freed Spider-Man from Dormammu's grasp, but the demon blocked the exit preventing their escape. Spider-Man threw the Wand in order to distract Dormammu then immediately used his webbing to grab it back. The two heroes were then able to escape.

Mary Jane came into the chamber demanding to see her father. Spider-Man tried to tell her that it was all an illusion but she does not believe him. 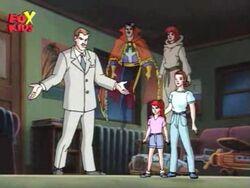 Stephen used his magic to reveal the truth about her father to her by showing Mary Jane her true memories of her father yelling at her. Strange explained that Mordo was able to use broken emotional ties to control others.

Mary Jane then came to terms with her past.

Dormammu suddenly reached through the portal and grabbed Mary Jane.

Stephen explained that Dormammu can only come into our dimension if he was invited, whether by Mordo or Mary Jane. Thus, Dormammu was attempting to trick her.

Dormammu appeared as Mary Jane's father; however, she did not fall for it and was returned to Spider-Man. Stephen then uses a spell to close the portal once and for all.

The building began to collapse so Stephen transported the four of them outside.

Spider-Man, Stephen, and Wong thank each other. Spider-Man left with Mary Jane to return her home. Stephen then sensed that someone powerful is watching him. Someone who's powers dwarfed his own. He did not know that this person was Madame Web. 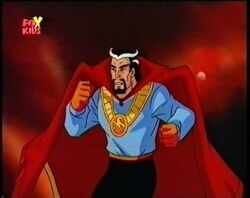 At some point, Stephen began battling a dark entity. However, he lost the creature when it sensed a powerful being.

He learned that the entity had possessed Bruce Banner because of his alter ego Hulk. He joined She-Hulk, Bruce's cousin, and entered his mind to free him.

While in Bruce's mind the two encountered manifestations of Hulk and Grey Hulk. The four were able to defeat the entity stopping Dark Hulk. 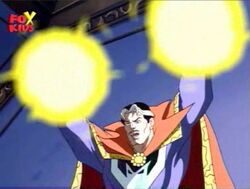 Doctor Strange controls high level magic and is a cosmic energy wielder able to generate a near infinite range of effects. The magic he uses allows him to shoot energy blasts, grant himself and others the power of flight, teleport himself and others, augment matter, project powerful shields, as well as weaken the barriers of others, and create illusions in the form of holographic projections and decoys of himself. He also has some martial arts prowess as he was able to overcome a man who had caught him with his staff.

He can enter the mind of another person, similar to Charles Xavier. He also possesses a significant degree of cosmic awareness thus being able to sense powerful beings.

Strange has possession of the Eye of Agamotto permitting a wide range of magical effects including seeing through deception, brain washing and casting powerful light capable of purging dark magic users. He has also taken possession of the Wand of Watoomb and possibly other mystical artifacts. It is unknown whether he uses any of them or if he just watches over them.

It is unknown whether Doctor Strange was really overpowered by Spider-Man or if he was simply surprised by the hero's sudden change of heart and/or did not wish to hurt him.

Strange is voiced by John Vernon in Spider-Man and Maurice LaMarche in The Incredible Hulk. Coincidentally, Vernon voiced Thaddeus Ross on Hulk. He has two blink-and-you-miss-it cameos in X-Men that are unvoiced and unnamed.

Each series featured a slightly different look for him. On X-Men, he lacks his usual grey hairs. On The Incredible Hulk, he had a goatee rather than a simple mustache.

Doctor Strange is the Sorcerer Supreme, the most powerful sorcerer in a given dimension. However, no such reference is made in the Marvel Animated Universe. It is unknown whether the term was simply ignored or if it did not exist within the animated universe. Another possibility is that Doctor Strange is not the most powerful sorcerer and thus not the Sorcerer Supreme. It is possible since it is not mentioned what happened to Ancient One.