Otto Octavius, also known as Doctor Octopus or shortened to Doc Ock, is a brilliant scientist with four powerful mechanical arms bonded to his body controlled with his mind. 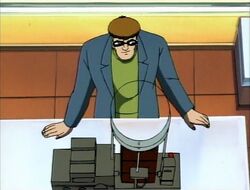 Otto Octavius helped run a science summer camp where Ben Parker took a young Peter Parker. Octavius helped mentor Peter, who was like him and smart but picked on by the other children.

Otto was working for the Hardy Foundation when he became desperate to finish his experiment. He created four mechanical tentacles that he could control with his mind. They went where he could not. He worked in a small basement when an accident bonded the arms to his body.

He then took on the name Doctor Octopus. He also started to wear the sunglasses since the accident made his eyes more sensitive to the light.

He went to the Hardy estate to seek revenge against Anastasia Hardy for cutting his grant. He kidnapped her daughter Felicia, who happened to be going out on a date with Peter.

J. Jonah Jameson went on J3 to appeal to Octavius to hear his demands. However, Jameson lost his temper, angering Octopus. He demanded that Jameson personally deliver the money. 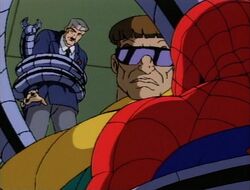 When Octopus contacted Anastasia again, he spoke to Peter. Remembering him from the days of science camp, Octopus agreed to let Peter deliver the money.

Peter arrived and the two began talking about science. However, when Octopus revealed his plans Peter became horrified. He threw Peter out.

Octopus was sent to prison, possibly Ryker's Island, where his arms were trapped in each of the room's four corners and he could only sit in the middle.

He later was broken out along with Mysterio, Chameleon, Scorpion, Shocker, and Rhino. They formed the Insidious Six under command of the Kingpin. They fought Spider-Man and beat him. Unmasking him, they found he was Peter. However, Octopus theorized that Spider-Man's poor performance meant that Peter was not really him. They captured Peter and Octopus faked being a medical doctor to fool his Aunt May. Peter led him to the real Spider-Man where he appeared and defeated them all.

He later created the Octobot to help him fight Spider-Man. He later found Spider-Man without any memory. He convinced the hero that he was Octopus' partner. However, a taxi driver and a terminally ill girl helped him get his memory back. Spider-Man then defeated him again.

Octopus later learned that Anastasia's husband was the infamous burglar known as The Cat. He tried to blackmail the Hardys, but was stopped by Kingpin. Kingpin had Octopus help kidnap Cat from S.H.I.E.L.D. They forced Cat to redevelop the super soldier serum that created Captain America. They turned Cat's daughter Felicia into Black Cat. However, Cat and Black Cat teamed up with Spider-Man and defeated them.

Octopus once again joined the Insidious Six under the Kingpin. Their plan was to find the doomsday device developed by Red Skull during World War II. They traveled to Russia where Chameleon betrayed them, revealing himself to be Red Skull's son. He released his father, along with Captain America. They used the device on Red Skull's other son to create Electro. They were eventually stopped.

Octopus was one of the supervillains chosen by the Beyonder for the Secret Wars. His land was taken over by Doctor Doom for his New Latveria. He teamed up with Red Skull and Alistair Smythe to get it back. However, he was defeated by the superheroes. He was sent back to Earth with no memory of what happened. 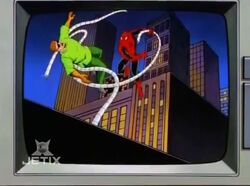 Footage of a fight between him and Spider-Man was shown when the hero was assumed killed by the authorities after Venom and Carnage hijacked a shuttle bound for Counter-Earth. 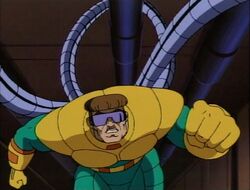 Doctor Octopus has four metal tentacles that he can control mentally and act like normal arms. They can extend to tremendous distances. They are incredibly strong. Octavius has claimed that they are indestructible, though both lasers and acid have damaged them. They are fused to his body and do not appear removable, as he had them on even in prison. It is unknown just how exactly he is able to control the tentacles mentally.

As powerful as they are, he has a number of weaknesses. The tentacles are metal machines and are vulnerable to magnets. They can also be damaged and likely destroyed through various means such as lasers and acid. While the tentacles are strong, he himself is still a normal human being with all the vulnerabilities. If his opponents can get close enough they can knock him out like any normal person.

In an alternate universe, Doctor Octopus was defeated by Spider-Man. His tentacles were taken by the hero to become a more literal spider. This version teamed up with Spider-Man as part of the Spider-Men.

His design in the series was original, likely altered for the purposes of the action figures. In the comics and most other media, he is a short, fat man who often wears a suit or jumpsuit.

He had no relationship to Peter before his criminal career began.

He had no relationship to Hardy family.

He could remove his tentacles and control them remotely.

He once almost married Aunt May.

He was the one who started the Sinister Six, renamed in this show due to censorship issues, under the disguise of Master Planner. This was later shown in The Spectacular Spider-Man.