Victor von Doom, better known as Doctor Doom is a genius and one of the most infamous supervillains on Earth. 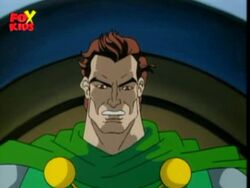 Victor was a poor boy born in Latveria. After the death of his parents, Doom came to the United States of America to study.

He was roommates with Reed Richards, who was also a genius. However, Doom made a mistake that Reed tried to correct it. Doom thought he was right and proceeded with his experiment but it exploded, scarring his face.

Doom left America returning to Latveria where he took over the country. He built an army of Doombots to police the country. He designed a special armor to hide his face behind a skull-like helmet.

Meanwhile, Reed married Sue Storm. The two, her brother Johnny, and Reed's friend Ben Grimm went into space to study cosmic radiation. They were bombarded and became the Fantastic Four.

When the Silver Surfer was trapped on Earth, Doom tried to steal his powers. However, the Fantastic Four stopped him.

He later trapped the Four on an island where he detonated a nuclear device. This caused them to lose their powers. He tried to stop them, but Daredevil assisted them until they got their powers back. 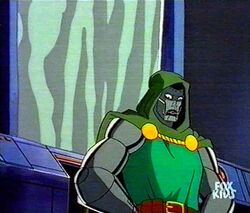 While attempting to fight the Hulk, Doom kidnapped Bruce Banner's cousin Jennifer Walters. She was injured in the process and Bruce gave her a transfusion to help. However, his gamma radiated blood turned her into She-Hulk. The two Hulks defeated him.

When the two Hulks went to Hollywood and she was going to star in her own film, Doom attacked them. However, he was once again defeated. 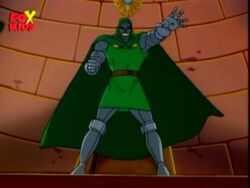 When the Beyonder wanted to test Spider-Man, Doom was transported to Battleworld along with Red Skull, Alistair Smythe, Doctor Octopus, and Lizard as part of the Secret Wars. Doom took Doc Ock's territory to form New Latveria.

Spider-Man was able to bring the Fantastic Four, Iron Man, Captain America, Storm, and Black Cat. They were able to defeat the other villains. When he was attacked by the Four, he captured Thing and returned the others. He used the planet's advanced technology to cure his scars and return Thing to normal. Ben then pledged to help him.

He then used the technology to steal the powers of the Beyonder. He proved too powerful for even all the heroes together. However, his dreams came to life and attacked his people. Spider-Man told him that with great power comes great responsibility. Doom then gave up his powers.

Beyonder then revealed that Doom never really had his powers, just the illusion of them. He was returned to Earth with no memory of what happened. 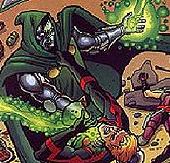 Doom also battled the Avengers and Black Knight when the latter tried to sell him a device called the Ultimate Amplifier. Doom revealed he had already developed such technology over a year ago and gave both the Avengers and the villain the death penalty for trespassing, but they managed to escape.

Doctor Doom was voiced by Neil Ross in Fantastic Four's season one, Simon Templeman in season two and on The Incredible Hulk, and Tom Kane on Spider-Man.

"The Mask of Doom, Part One" mistakingly credits John Vernon with voicing the role when it was actually Ross.

On Spider-Man he was given an Eastern European accent befitting the location of Latveria. In all other series, he speaks with a more English-sounding accent.

He was asked to join the original Sinister Six, but refused as he wanted to focus on the Fantastic Four.