Keene Marlow, also known as Destroyer, is a member of the Six American Warriors.

After the first super-soldier experiment was a success, the exact formula was lost and scientists tried to recreate it. However, due to uncertainty as to the exact nature of the formulas components and chemical shortages, different results or powers manifested in each of the five test subjects that participated in the next series of experiments. However, due to the improper mix of the formula, there was an instability in the powers demonstrated by the volunteers. To cope with this problem, special rings were designed that allowed the agents to activate their powers. In spite of this, it was determined that each person's powers would eventually fade away.

One of those five was Keene Marlow, best friend to Ben Parker, the uncle of Peter Parker. Keene and Ben were both in love with a girl named Maria. Against orders, Keene told Maria that he was a superhero; Ben couldn’t compete with that. Keene and Maria were married with Ben as their best man. 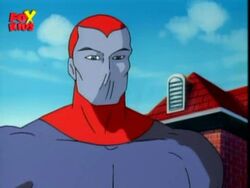 Even knowing the restrictions of his powers, Keene continued to work for the government as an agent of S.H.I.E.L.D., eventually reaching the rank of Commander. Maria begged him to give up being a hero, but he was too caught up in the thrill of it. One night, Maria and him were coming from dinner, witnessing a gang war. Keene activated his powers to stop them, he did, but Maria was caught in the crossfire.

Keene had become the Destroyer alright, the destroyer of lives. He gave his costume and ring to Ben and also his key to the doomsday device, so that he would never be tempted again to use his powers. It was at that moment they both learned, with great power, comes great responsibility. Keene then continued to work for S.H.I.E.L.D., his exact duties and length of tenure are never discussed. 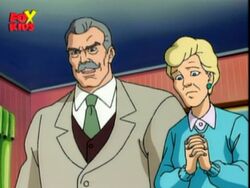 Later, when Peter and Mary Jane were moving into their own place, May decided to sell her house, and move in with Anna Watson, Mary Jane’s aunt. Keene was assigned to either prevent her from selling her house, or to get the Destroyer suit, ring, and key.

When Shocker and Scorpion attacked Aunt May at her house, he suited up as the Destroyer once more. He teamed up with Spider-Man to fight the criminals, but his powers deactivated. Shocker and Scorpion had gotten his key. Spider-Man and Keene had to assemble the remaining four members of the Six American Warriors. When in the Doomsday complex, Captain America was revived along with the Red Skull. 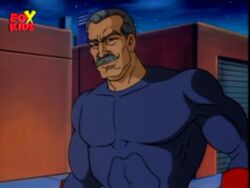 As the Destroyer and Spider-Man went off to reunite the Six American Warriors and face the threat, the two heroes bonded over their love of adventuring and facing impossible odds. When Spider-Man asked the old hero if he missed being an adventurer, Keene answered "Between us old costumed cronies, more then the air I breathed." The Six American Warriors then were reunited, and just in time. The Red Skull turned his son into Electro. When the Six and Spider-Man teamed up to stop Electro, they succeeded, but at a cost. Captain America and Red Skull were once again trapped in the Doomsday Vortex.

Destroyer was voiced by Roy Dotrice while Dee Bradley Baker voiced the younger version in the flashbacks.

Retrieved from "https://marvelanimated.fandom.com/wiki/Destroyer?oldid=54743"
Community content is available under CC-BY-SA unless otherwise noted.