Deadpool is a figure once associated with Team X members, particularly Wolverine and Sabretooth.

Little is known about the figure known as Deadpool. He wears a red and black full body costume with numerous pouches on his belt, arm band, and leg band presumably for weapons.

He apparently has ties to the mutants Wolverine and Sabretooth, possibly connected to Weapon X and Team X in some way. 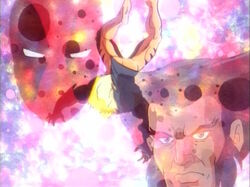 Professor Charles Xavier, head of the X-Men, saw a vision of Deadpool along with Maverick, a Talos robot, Janice Hollenbeck, and Omega Red when he scanned Sabretooth's mind.

Morph knew about Deadpool and his connections to Wolverine. He morphed into the figure in order to taunt Wolverine, who tracked him to an underground mine.

When Xavier's dark side came out, he used the image of Deadpool to taunt Wolverine.

The character of Deadpool never actually appeared himself. He only appeared in memories and when Morph transformed. Even then, he is never named nor was he voiced.

This is Deadpool's first version outside of the comics. The character himself would not appear until Hulk vs Wolverine.

His real name is stated to be Wade Wilson. It's possible that due to his unstable mentality it something else but that is what he goes by.

While not technically a mutant, got from Weapon X a much more advanced healing factor than Wolverine's to counteract the cancer spreading within his body. The procedure left him horrifically scarred.

He modeled his costume after Spider-Man.

He knows he is in a comic book and often breaks the fourth wall.

He has teamed up with Cable.

Retrieved from "https://marvelanimated.fandom.com/wiki/Deadpool?oldid=73432"
Community content is available under CC-BY-SA unless otherwise noted.