Dazzler (Pryde of the X-Men)

Dazzler is from the Non MAU episode "Pryde of the X-Men".

Alison Blaire, better known as Dazzler, is a mutant, superhero, and member of the X-Men.

Alison Blaire joined Professor X's X-Men. She took on the name of Dazzler because of her brightly colored powers. 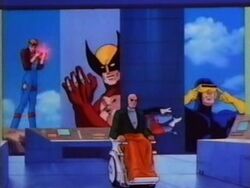 Dazzler was training in the Danger Room along with Wolverine, Cyclops, Storm, Colossus, and Nightcrawler. She was fighting large plants. It was at this time that Kitty Pryde came to the Xavier Mansion.

After they were done Xavier invited all of them up to the control room to meet Kitty. Nightcrawler was the first there and his appearance frightened her. She phased through the controls shorting them out. Colossus caught her and introduced her to the rest of the team. However, Wolverine did not feel that a young girl was ready to join the team. 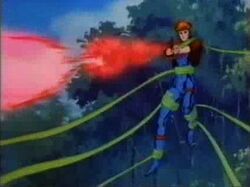 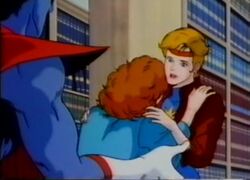 The X-Men arrived back at the mansion and pulled Xavier out from under a pile of rubble. Kitty woke up to find Nightcrawler staring down at her. She freaked out but Dazzler comforted her. Kitty then got into an argument with Wolverine before wondering where Xavier was. Xavier appeared to show that he was alright.

The X-Men encountered Pyro so Dazzler decided to take him on. The X-Men went on without her.

Xavier kept the Blackbird on a view screen that Nightcrawler could see. Xavier told him that he must teleported aboard at the very last second. Unfortunately Nightcrawler waited too long and the comet hit the asteroid. 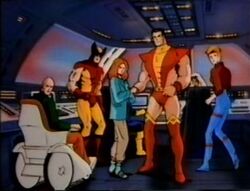 Dazzler can transform sound into strong bolts of light. She can shoot these creating a powerful blast.

Dazzler is a caring person. She instantly takes a liking to Kitty Pryde. Dazzler comforts her after the attack by Magneto and Juggernaut in a motherly way.

Dazzler is voiced by Alexandra Stoddart. This is the final role for Stoddart. 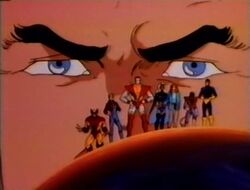 This is the first animated version of the character outside the comics. Interestingly, the character was created in 1978 as part of a multimedia event that would have included an animated special. When the record company pulled out the project was scrapped leaving only the comic book version.

She was included on the team because she was a member in the comics at the time. This bothered some fans who wished to see her spot used by a more popular character such as Jean Grey.[1]

The uniform she wears in the episode is based on the character's second outfit that she wore when she joined the X-Men. 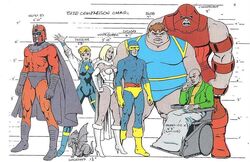 Concept art describes her as being five feet nine inches tall. She is the second tallest X-Man behind only Cyclops, by four inches, and only one inch shorter than White Queen.

Blaire is a singer. She uses her powers as part of her show, and many of her audience assumes it is special effects.

She first met the X-Men at one of her shows. White Queen's Hellfire Club attacked and she fought them off with the X-Men. She then helped the team find Kitty Pryde, but found their adventures too much for her and turned down their offer to join.

She wandered around for a while performing shows. She would have to defeat villains and help heroes, often at the expense of her career. She turned down several more offers to join other teams.

She hid her status as a mutant to help her career. When anti-mutant sentiment grew, she came out publicly. This backfired on her and her career was ruined sending her into a depressive state. She goes into hiding and helps another mutant singer.

She is possessed by a psychic mutant. The X-Men free her and she joins the team.

Juggernaut, Colossus, and Kitty have all confessed to being fans of her music.