For the X-Men episode, see "Dazzled".

Alison Blaire, also known as Dazzler, is a mutant singer. 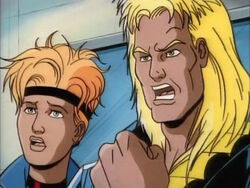 Dazzler, along with another unnamed woman, were the make-up artists for Longshot. She left Mojoworld after Mojo's television studio was destroyed by the X-Men.

She later began singing at a night club. While Remy LeBeau, a fan of Dazzler, was enjoying her last performance, Scott Summers left the club. Later, Dazzler was kidnapped by the Inner Circle's Donald Pierce. With the help of Scott, they defeated the villains as they took off. 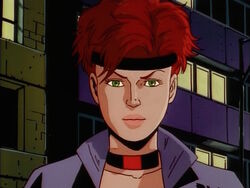 Dazzler flirted with Cyclops and set up a date for the next day. Reluctantly, Scott accepted because he wanted to talk to Dazzler about her mutant powers. Later, at the same night club, Dazzler was surprised to see Scott. She kissed Scott in front of Jean Grey who was being influenced by Jason Wyngarde and Emma Frost. Dazzler found it entertaining that Scott couldn't "take a hint" that Jean didn't want to be with him when she stormed off. Dazzler followed Scott outside the club. As she exited the club she spotted Scott being attacked by Hellfire Club minions. Dazzler defeated the men and informed Scott where the Inner Circle's Headquarters were located.

Dazzler's voice actress was uncredited, though it is rumored to be Catherine Disher.

Dazzler's two appearances were not intended to be the same character. Her appearance for "Dazzled" was intentionally altered to create a difference, changing her usual blonde hair to become a brunette. Nonetheless, it is obvious to any comic book fan that they are the same.

Retrieved from "https://marvelanimated.fandom.com/wiki/Dazzler?oldid=89555"
Community content is available under CC-BY-SA unless otherwise noted.