Daredevil was blinded at a young age by radioactive chemicals that fell from an oncoming vehicle.

Matt Murdock's father, Jack Murdock, was a boxer. However, in order to support Matt, he began working for a mobster. When Matt discovered this, he was unable to deal with the shame of it, and was blinded after carelessly crossing the road by an oncoming vehicle full of radioactive chemicals, in which was being smuggled through the city under the crime lord Kingpin's orders. Subsequently, his father vowed revenge. It so happened that this was the same mobster that Matt's father was working for. As he attempted to turn the criminal mastermind in to the police, Matt's father was discovered gathering evidence, and was therefore killed by Kingpin's men. Matt then vowed to avenge his father's death. Even though he was blind, Matt's other senses seemed to be enhanced as of the accident, and upon meeting a mysterious man named "Stick", was mentored to control these senses, and took on a crimefighting secret identity, the Daredevil, as well as taking on a regular career as a lawyer. 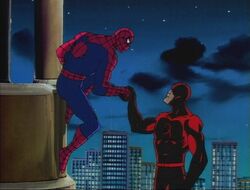