Danger Room is from the Non MAU episode "Pryde of the X-Men".

The Danger Room is a room in the Xavier Mansion used by the X-Men for training.

The X-Men learn to use their powers and fighting techniques using a combination of holograms and robotics.

The X-Men were training when Kitty Pryde arrived at the mansion. They were in an apparently Mayan setting. 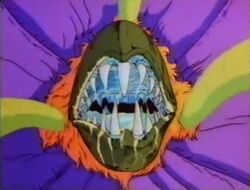 When they were done Professor X asked the X-Men to come up to meet Kitty. Nightcrawler was the first there and his appearance frightened Kitty. She phased through the control and into the Danger Room.

Kitty met the other X-Men, but Wolverine voiced that he did not feel the young girl was ready to be an X-Man. Just then, a red alarm went off and everyone left.

Retrieved from "https://marvelanimated.fandom.com/wiki/Danger_Room_(Pryde_of_the_X-Men)?oldid=81267"
Community content is available under CC-BY-SA unless otherwise noted.