In a apocalyptic future, Cyclops is one of the servants of Apocalypse.

In this timeline, it is unknown just how he went from a member of the X-Men to servant of the powerful villain.

Many years later, He stood atop a large pyramid in front of a crowd of people along with Mister Sinister. Soon, Apocalypse came to address the cheering crowd.

Had the series gone on to a second season as planned, the Age of Apocalypse would have been featured prominently and more of this character would likely have been seen. 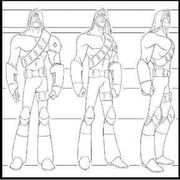 Concept art was created for the character.

Retrieved from "https://marvelanimated.fandom.com/wiki/Cyclops_(Age_of_Apocalypse)_(Yost_Universe)?oldid=69544"
Community content is available under CC-BY-SA unless otherwise noted.