Dr. Curtis Connors is a professor at Empire State University. He accidentally turned himself into a large creature called Lizard.

Dr. Curt Connors was a biology teacher and ESU and scientist studying reptiles and cell regeneration. Connors had lost his arm. He became so desperate on regrowing his arm, that he tested his reptile potion on himself. The serum regrew his arm but also turned him into a Lizard creature. 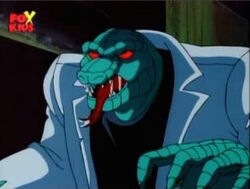 He went through New York’s sewers like an animal. Peter Parker needed money so he had to try to take pictures of the strange Lizard creature and sell them to The Bugle Bugle. When the Lizard kidnapped Martha Connors, Spider-Man had to intervene to save her. He discovered that the Lizard was Doc Connors mutated. He used a gene-cleansing device to cure Connors and save Martha.

Connors was studying a supposed fountain of youth called the Tablet of Time. This makes him the target of both Silvermane and Kingpin. He transforms into the Lizard and goes crazy again but soon turns back to normal and is kidnapped by Tombstone for Silvermane. He turns back into the Lizard and battles the younger Silvermane who defeats the brute easily. Curt is cured again by being exposed to the Tablet’s rays.

Mutant lizards that lived in the sewers found out that Dr. Connors created them later abducted Connors. He became their Lizard King and ruled over them and the games they participated in. With help from Mary Jane Watson, Debra Whitman, and Martha Connors, Spider-Man was able to return Curt to his human self.

During the Secret Wars, the Beyonder kidnapped Lizard to be a part of his team of villains. After he crashed into the heroes' headquarters, Lizard was captured. Reed Richards was able to revive the human portion of his brain. Lizard helped the team of heroes battle Doctor Doom and the other villains, as well as help Reed Richards and Iron Man operate the alien technology. At the ends of the war, he is returned to human for with no memory of what happened.

In the Spider-Carnage Universe, Curt discovered that there was a possibility that Ben Reilly was actually the original Peter Parker and the current one was the clone created by Miles Warren. Peter then bonded with the Carnage symbiote and became Spider-Carnage. He then took over the world.

Retrieved from "https://marvelanimated.fandom.com/wiki/Curt_Connors?oldid=64112"
Community content is available under CC-BY-SA unless otherwise noted.