Peter Rasputin, also known as Colossus, is a mutant and former member of the X-Men.

Colossus joined the X-Men. Colossus trained with Shadowcat and Nightcrawler when Wolverine messed the three up and left them hanging once they were captured by him. Once Jean Grey blew up the Xavier Mansion, Colossus left the X-Men.

He returned to Russia to be with his family. When Wolverine reformed the team, Colossus turned down the offer because he did not want to leave his family again.

Colossus was voiced by Nolan North.

The spelling of Colossus's real name was changed from the Russian Piotr to the English Peter. 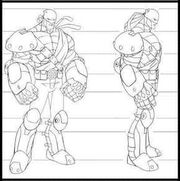 Retrieved from "https://marvelanimated.fandom.com/wiki/Colossus_(Yost_Universe)?oldid=67194"
Community content is available under CC-BY-SA unless otherwise noted.