Colossus is from the Non MAU episode "Pryde of the X-Men".

Piotr Rasputin, better known as Colossus, is a mutant and part of the X-Men.

Piotr Rasputin was born in Russia and eventually joined Professor X's X-Men. He took on the name of Colossus because of his super-strength and size.

Colossus was training in the Danger Room along with Wolverine, Cyclops, Storm, Dazzler, and Nightcrawler. He was running through a temple dodging large pillars. It was at this time that Kitty Pryde came to the Xavier Mansion.

After they were done Xavier invited all of them up to the control room to meet Kitty. Nightcrawler was the first there and his appearance frightened her. She phased through the controls shorting them out. Colossus caught her and introduced her to the rest of the team. However, Wolverine did not feel that a young girl was ready to join the team. 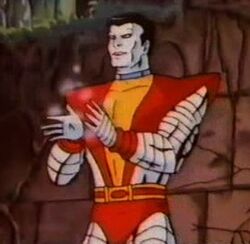 The X-Men arrived back at the mansion and pulled Xavier out from under a pile of rubble. Colossus picked up Xavier while Cyclops used his eye beams to clear a table so that he could receive medical treatment.

Xavier kept the Blackbird on a viewscreen that Nightcrawler could see. Xavier told him that he must teleported aboard at the very last second. Unfortunately Nightcrawler waited too long and the comet hit the asteroid.

Colossus' mutant power is to cover himself in metal. This makes him strong enough to take on the strongest of foes such as Juggernaut, and impervious to most damage. However, he does not seem strong enough to move the Blob.

Colossus is voiced by Dan Gilvezan.

Retrieved from "https://marvelanimated.fandom.com/wiki/Colossus_(Pryde_of_the_X-Men)?oldid=79000"
Community content is available under CC-BY-SA unless otherwise noted.