Claustrophobia is the fear of tight or confined places. It comes from a fear of being unable to escape. 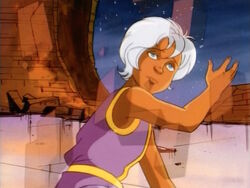 Storm of the X-Men has claustrophobia. At some point in her youth, she was buried under rubble for some reason. This came up during a battle with Magneto at Metro Chemical when he dropped a brick wall on her. Rogue saved her but her trauma caused her to pass out. Professor X tried to get her to overcome it but she soon had another attack during a Danger Room session. While held as a prisoner on Genosha, she was put in an isolation cell once again triggering her claustrophobia.

War Machine developed claustrophobia after nearly drowning in his armor. While he continued to help Iron Man he tried to avoid entering the armor again. He eventually overcame the fear and once more became War Machine.

The reason for Storm's claustrophobia was alluded to but not specifically stated. In the comics, it is specified that she was buried under rubble during a botched air strike that also killed her parents.

Retrieved from "https://marvelanimated.fandom.com/wiki/Claustrophobia?oldid=66344"
Community content is available under CC-BY-SA unless otherwise noted.