He began acting professionally when he was just eight years old where he used the stage name C.B. Barnes. At the age of thirteen his family moved from Maine and he began acting in over one hundred television commercials. Barnes was for a time the teenage spokesman for Greenpeace.

Barnes was a big Spider-Man fan as a child.[1]

His first major role was in American Dreamer. He worked for two years on As the World Turns. He got work in the television movie Picking Up the Pieces.

One of Barnes' earliest hits was as Scott Hayden in the Starman television series, running from 1986 to 1987. His father was played by Robert Hays, who would go on to play Iron Man on both Iron Man and Barnes' series Spider-Man. Coincidentally, the comics would develop a father-son relationship between Spider-Man and Iron Man.

In 1988 he played Ross Harper on Day by Day. He felt Hays played a great father and was a good mentor to him. During this time columnists and pundits predicted a "big career" for Barnes.

He also worked on the CBS Schoolbreak and ABC Weekend specials.

To film audiences, Barnes is known best for his portrayal as Prince Eric in the 1989 film The Little Mermaid, which he got when we was only sixteen. Despite his age, the producers cast him because he sounded much older. He claims that the movie is his favorite of all the Walt Disney films. Barnes liked the idea that being in a Disney movie would last forever, something he could show to his grandchildren. He went on to reprise the role in the 2002 video game Kingdom Hearts II along with Kevin Michael Richardson and Corey Burton. Eric was also played by fellow Spider-Man actor Rob Paulsen in the direct to video sequel and The Spectacular Spider-Man actor Jeff Bennett in the television series.

He then starred in a number of television films such as The Wonderful World of Disney television film Exile and Just Perfect in 1990. The next year he would go on to play in Frankenstein: The College Years and later in Murder Without Motive: The Edmund Perry Story. He would later appear in the anthology series Real Ghosts and Spring Fling!.

He voiced several additional voices in Captain Planet and the Planeteers, that ran between 1990 and 1996. In 1991 he did some voice work for the video game Police Quest III: The Kindred.

Though his most successful and popular role would be in the five season long Spider-Man, in which Barnes played the title character in all sixty-five episodes. The series is the second longest animated series based on a Marvel Comics property behind X-Men, and thus is the actor to play the character the most. 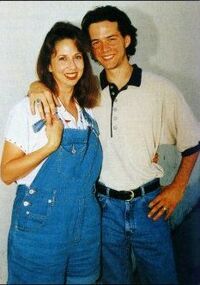 Barnes had to fight for the part. He joked that he bit and clawed the other actors for the role. He went in feeling that he would get it, and when he saw Sara Ballantine, who played Mary Jane Watson, that he would see her when the show started. He said "I grew up on Spider-Man comics. I knew exactly who he was, his quips, his humor and his burden, so I had a strong feeling I would get the part." One of the actors he beat for the part was Billy Campbell.[2]

In an interview Barnes said of the role, "I'm keeping Peter Parker a nice, sweet guy. He would be really cool, except he has all this pressure and responsibility. He's not a geek, he's just so burdened by saving the world that people don't understand him." He stated that when voicing Peter he made his voice higher and more innocent while he went deeper for Spider-Man.[3]

He felt the line "With great power comes great responsibility" was not as pretentious as Superman's "Truth, justice, and the American way" and gave the character a mythical hero quality. He enjoyed the idea that Spider-Man had to save people. He felt character was noble in that he acknowledges and admits his problems while overcoming them.

The episode "Secrets of the Six" featured a flashback of Uncle Ben. Brian Keith was unavailable so Barnes filled in for the few lines.

Barnes did narration work in several electronic versions of classic Spider-Man comics that were released at the time. These comics also featured animation and theme music from the series.

He often recorded his lines with others in the scene. His favorite villain of the series was Hobgoblin for the way Mark Hamill portrayed him. He stated "This guy's really intense, so I've really got to be a hero!" He noted that Hobgoblin was much different than Hamill's portrayal of Joker from the DC Animated Universe.

He also liked Kraven the Hunter.

He found The Alien Costume trilogy difficult to play as Peter was battling his own costume. He said that it was "really spiritual in a weird way." He did enjoy the way Hank Azaria transformed from Eddie Brock into Venom and how extreme he was. He attempted to mimic what Azaria was doing when Peter has the symbiote in order to foreshadow the villain. Barnes went even deeper and grittier for those episodes.

Of Edward Asner Barnes said that he was fearless, willing to say anything anytime to anyone. He noted that Asner could deliver a perfect reading in one take, despite taking little naps between his lines.[4]

He really liked story editor John Semper, Jr.. He claimed Stan Lee was the coolest guy and compared him to a combination of Spider-Man and Doctor Strange, his two favorite Marvel Comics heroes.

When he found out that Hays was voicing Iron Man on Iron Man Barnes was extremely excited at the idea of doing a crossover with his Starman co-star.

He wished he could have done a live-action Spider-Man movie, hoping that James Cameron would have called him as he was making a Spider-Man movie at the time. He said "I've fought Venom so many times, I would hate to see somebody else get the chance!"

Though Spider-Man Unlimited followed Spider-Man Barnes, like the rest of the cast and crew, had been replaced by Rino Romano.

Barnes would return to film as Greg Brady in the two parody movies The Brady Bunch Movie in 1995 and A Very Brady Sequel in 1996. Interestingly, in the Day by Day episode "A Very Brady Episode" Barnes' character has a dream where he is in the series The Brady Bunch as the long-lost brother "Chuck." Also of interest, Barnes shares a birthday with original Peter Brady actor Christopher Knight. During his breaks he would try to visit the sets of Star Trek: Deep Space Nine and Star Trek: Voyager, which was filming next door, but found security too tight.

Between 1996 and 2000 Barnes played Leonard Rickets in Malcolm & Eddie. He played in the direct to video film A Pig's Tale.

He returned to video game work in 1998 with Return to Krondor. In 1999 Barnes voiced Stripes the Tiger in Sonic Underground and in 2000 he voiced Target McStone in Jackie Chan Adventures.

He would voice Scott Donovan in both the 2002 game Law & Order: Dead on the Money and in 2003 with Law & Order: Double or Nothing.

Barnes returned to Disney work in 2002 when he voiced Prince Charming in the direct to video movies Cinderella II: Dreams Come True and again in 2007 in Cinderella III: A Twist in Time.

In 2010 he returned to the comic book world by playing Spider-Man Noir in the video game Spider-Man: Shattered Dimensions. The game also features the voices of Neil Patrick Harris, Dan Gilvezan, and Josh Keaton, each of whom voiced Spider-Man in a different animated series. He also teamed up with fellow Spider-Man voice actors Stan Lee, Jim Cummings, and Jennifer Hale. Though Cummings is the only actor he actually interacts with in the game. Barnes said of accepting the role, "I am a huge Spider-Man fan – to be involved in this, you have to be a fan." Since he had been mostly inactive as an actor, he quickly said yes to voicing the character again. "I had put all this [acting] stuff aside and moved into a different phase of my life, and they called me," he said. "When you go into the [voice] booth, it all comes back." However, the voice director told him to play this alternate universe version of Spider-Man as older, darker, and more cynical. "So basically, he’s me. This new character is much more appropriate for me now. Noir is so dark...I felt oppressed in the performance. It’s a great honor to assume that character. You’re the latest incarnation of an icon, and you have to honor it."

The following year he voiced Spider-Man 2099 in Spider-Man: Edge of Time, partially a sequel to Shattered Dimensions, with Keaton voicing Amazing Spider-Man.

He played Symbiote Spider-Man and Superior Spider-Man on Marvel Heroes.

He went on to play Donald Menken in the movie-based game The Amazing Spider-Man 2.

At some point he married actress Dawn Nallick, but they have since divorced. In 2012 he married Rebecca Guyadeen and are still together.

Outside of acting Barnes enjoys to read, play the guitar, and practice yoga. Before yoga, Barnes was a martial artist of different styles including Shotokan, Kenpō, and Tai chi chuan.

Just recently, he earned his Master's Degree and planned to begin a doctoral program in 2010. 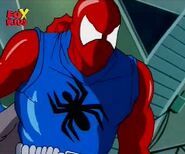 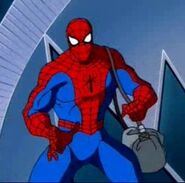 Electro (Marvel Universe)
Add a photo to this gallery

Retrieved from "https://marvelanimated.fandom.com/wiki/Christopher_Daniel_Barnes?oldid=79524"
Community content is available under CC-BY-SA unless otherwise noted.