Christmas Eve is from the Non MAU series The Spectacular Spider-Man.

In the Christian faith, Christmas Eve is an annual holiday celebrated on December 24. It is followed by Christmas. It is considered a joyous time full of good cheer. It is the last day for people to do their Christmas shopping.

In many places it snows during the Christmas season giving rise to the idea of a white Christmas.

Many people go shopping to purchase presents. They wrap up the gifts and put it under the Christmas tree before giving them to others. Other people put them in stockings and put them on their mantle above the fireplace.

Trees come in a variety of sizes. Regular homes, like that of the Parkers, tend to have smaller trees that can fit inside. Cities and major tourist attractions, like New York City and Rockefeller Center, tend to get much larger trees that are massive in size.

One popular tradition is to put up decorations. Many people put up lights up on the trim of their house. Many lights are put up on the tree. Usually the tree is topped with an angel or star. A popular decoration is a snow globe, a small sphere filled with water that imitates snow.

A popular activity to do around Christmas time is ice skating. The Lower Plaza at Rockefeller Center puts in a large skating rink that people can skate on.

Many people sing songs such as Deck the Halls, O Little Town of Bethlehem, O Tannenbaum, and The Nutcracker Suite.

Popular drinks during the Christmas season include eggnog and hot chocolate. 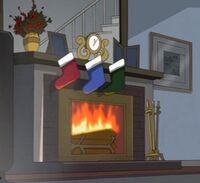 A popular legend for children is that of Santa Claus. He is said to live at the North Pole with his elves who make toys. He watches the children of the world and puts each one on a list. He sees if they have been naughty or nice and distributes toys accordingly.

This is the night that Santa rides his sleigh pulled by eight reindeer around the world to deliver the toys.

He is often portrayed as being an old man with white hair, a long beard, heavy set, and wearing a red suit with white trim. He wears a similar red stocking cap.

Often a department store will have a man dress up like Santa so the children can tell him what they want while the parents shop. Usually they will have others dress up like elves to work with Santa. They are usually stationed in an area dressed up to look like Santa's home.

After he defeated Mysterio, Spider-Man spent the morning looking for Blackie Gaxton who apparently knew what the stole technology was for. He spoke of a man who was planning something big. Spider-Man then chased a man called Patch who revealed that the man was called Master Planner.

Master Planner and the Tinkerer then broke out Rhino, Sandman, Mysterio, and Vulture. They sent Kraven the Hunter to free Electro and Doctor Octopus, but Doc Ock refused. Later they reformed the Sinister Six

Later a group of high school students comprised of Peter Parker, Gwen Stacy, Mary Jane Watson, Kenny Kong, Glory Grant, Randy Robertson, Sally Avril, Liz Allen, and Flash Thompson went to Rockefeller Center to skate. Randy and Sally displayed their skills while Kenny fell down. He almost crashed into Peter who dodged, then to avoid suspicion he purposely fell. Liz then offered to give him lessons, however she stopped when she saw that Flash was still in pain because of his broken leg.

Peter then tried to skate with Gwen who was upset at him for not talking to her after their kiss. Mary Jane told Peter that he was easily distracted and needed to focus. Peter then offered to buy her hot chocolate.

Meanwhile, Kraven tracked Spider-Man to the plaza so that Vulture and Electro could attack. Peter changed into Spider-Man and battled the two. He eventually slammed Vulture into the tree. Electro blasted the tree causing it to catch fire and fall over onto Vulture. Spider-Man then led Electro into a tire yard where he trapped him with melted rubber.

Sandman and Rhino then attacked the hero. Spider-Man lead them to the docks and sprayed Sandman with water. He then tricked Rhino into jumping onto thin ice so he would fall in. He then covered Sandman with snow so that the water in his body would freeze completely.

He then faced off against Kraven and Mysterio. They chased him to a department store. Spider-Man hit Kraven with a bottle of perfume so he couldn't track him. He tried to stop Mysterio but Kraven interrupted. Then Spider-Man realized he was going to face off against an exploding Mysterio robot. He grabbed the mall Santa and elf and swung away before the explosion knocked out Kraven. He then covered the entire store with a web and caught Mysterio.

During this time, Master Planner and Tinkerer extracted all of the Sinister Six except for Mysterio. The police came to capture Mysterio but found the other five missing.

Gwen and Mary Jane were horrified as they believed Peter had been crushed by the tree. Peter went to get more hot chocolate and returned to the plaza. Gwen was initially glad to see him, but she quickly remembered that she was mad at him. Peter gave an excuse which Gwen and Mary Jane believed.

Peter then tried to apologize for how he had been treating her. But they were interrupted when they saw that Vulture was missing.

Retrieved from "https://marvelanimated.fandom.com/wiki/Christmas_Eve_(The_Spectacular_Spider-Man)?oldid=93300"
Community content is available under CC-BY-SA unless otherwise noted.