In the Christian faith, Christmas Eve is an annual holiday celebrated on December 24th, the day before Christmas.

In many places, it snows during the Christmas season giving rise to the idea of a white Christmas.

According to legend, Christmas Eve is the day Santa Claus travels around the world distributing presents to the good children of the world. He flies around the world thanks to his reindeer. They land on rooftops where Santa enters the home. 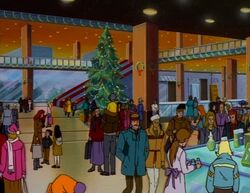 Christmas Eve is the last day to do any Christmas shopping as most stores are closed on Christmas Day. Therefore, many stores and shopping malls are busy with last minute shoppers. This can create hectic experiences to those involved.

Often people spend the day decorating a tree with lights, ornaments, and a large star on top. They will also put lights up on their house. 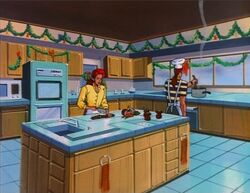 It is common for families, and close groups of people, to have a large Christmas dinner on that night. Foods made for the meal include turkey, cranberry glaze, oyster loaf, and daube glace. Poor groups will have smaller meals but appreciate them anyways.

Other activities include ice skating and singing Christmas carols such as Deck the Halls and Jingle Bells.

One Christmas Eve, the Morlock Leech became very sick. Ape and Annalee left their tunnels in search of medical supplies. 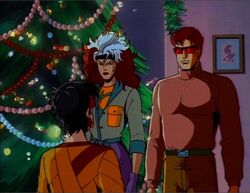 Meanwhile the X-Men were decorating the Xavier Mansion. Jubilee convinced Logan to go shopping with her and Storm.

Jean Grey and Gambit decided to make dinner. However, the two conflicted as each wanted to do their own version of the meal. Jean wanted a more traditional dinner while Gambit wanted to do his Southern style. Beast tried to make cranberry glaze in his lab but it exploded covering him in it, though he claimed it tasted good. 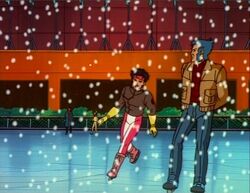 Logan became stressed by all the people in the stor and the three left the store immediately. The three then went ice skating at Rockefeller Center, where a large ice rink is set up each and every winter.

Ape and Annalee then stole an ambulance and tried to drive it away but ended up crashing into the Lower Plaza as they ran from the police. The two Morlocks convinced the X-Men to help them. The five then fled to the sewers with various medical devices. 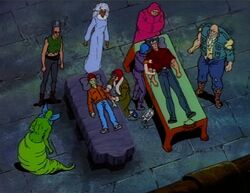 Logan performed a blood transfusion with a kit so he could use his healing factor to help the young mutant. Their intention was to keep Leech alive until Beast arrived to heal him. Fortunately the transfusion worked and Leech got better just as Beast got there.

Storm gave up her role as leader of the Morlocks giving it back to Callisto. This came after both the Morlocks and Logan berated her for not being there to help them. 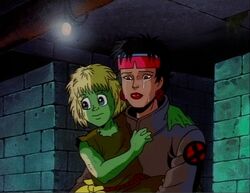 Having befriended Mariana Jubilee decided to skip dinner at the Xavier Mansion so they could spend it with the Morlocks.

Jean Grey and Gambit were upset that their dinner, which they spent many hours on, would not be eaten fresh though they preserved it for later.

The day was even celebrated on Counter-Earth. Each season, a church in The Basement flooded their yard so it would freeze. They would let the children skate for the season.

Once on Christmas Eve, Peter Parker went there to take some pictures for The Daily Byte. While there, he saw Karen O'Malley kidnapped by the Machine Men while she was visiting the graves of her parents.

Peter changed into Spider-Man and informed the Human Resistance. They stormed Castle Wundagore and freed her. During her captivity, the High Evolutionary learned that Karen was actually his granddaughter.

Retrieved from "https://marvelanimated.fandom.com/wiki/Christmas_Eve?oldid=79915"
Community content is available under CC-BY-SA unless otherwise noted.