Chimichangas is a short film. In it, Deadpool and Venom fight over Mexican food.

Traffic is stopped in all parts of a freeway interchange. Several cars have smashed into each other. One lays upside down. Several are smoking.

On the top road, Venom throws a car over the side. He turns and jumps up and down then leaps off the car. He kicks a car across the road.

He leaps over to a blue car teetering on the edge. He picks it up and tosses it aside. He laughs and wiggles his tongue.

Just then he hears the jingling of music behind him. He turns and sees a food truck racing down the road towards him.

Deadpool is behind the wheel. He sees Venom and skids to a halt as he approaches Venom. The side reads "CHIMICHANGAS" over his personal logo.

He lifts up the side window and pops out wearing a chef's hat. Venom races towards him, his tongue waving out. Deadpool looks shocked.

Venom continues running then leaps up into the air. He tackles Deadpool knocking the window shutter down and tipping the truck over then upside down. A jalapeno flies out.

He weakly looks up and reaches to move away. Venom's tentacle appears behind him and grabs him. Deadpool scratches the ground as he is pulled back.

Venom swings him around as he pulls him back towards the truck. Deadpool pulls out a sword and severs the tentacle. He swings the sword around slicing the tentacle five more times.

He lands on the ground with pieces of tentacle landing around him. He stands and readies his sword, the tentacles melt into liquid.

Deadpool reaches behind him and pulls out a chimichanga bursting with fillings. He looks at it realizing what he is holding and is shocked.

He watches as his opponent extends a tentacle to grab the food. He pulls the chimichanga into the truck, the doors closing behind it. Suddenly the whole vehicle shakes as he burps.

After a second, another burp blows the doors off the back. Kitchen utensils, a pan, and peppers fly out along with a big cloud of smoke.

Deadpool does several poses. Behind him, Venom runs around and hiccups releasing more flames. Tortillas fall all around him. Venom hiccups flames twice more. A tortilla lands right on his head. 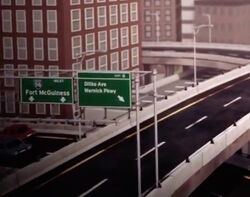 Marvel Entertainment and Funko collaborated to bring a series of short films with this one being the third after Spellbound and Bait 'n' Switch.

The setting for the film is based on the opening sequence of the Deadpool film. The freeway signs are from the film. 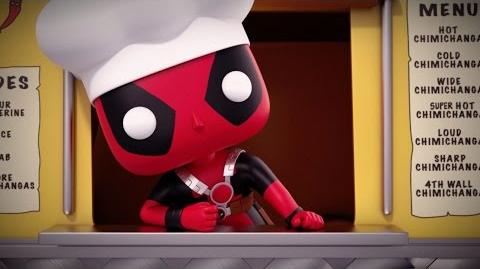